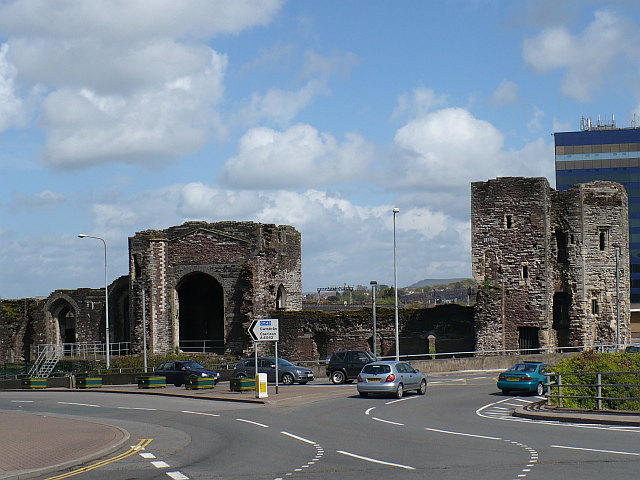 Location: Newport, Wales.
Built: 14th century.
Condition: Ruins.
Ownership / Access: --
Notes: Newport Castle is a ruined castle in Newport, Wales. It was built in the 14th century, probably by Hugh de Audley, 1st Earl of Gloucester or his son-in-law, Ralph, Earl of Stafford, with the purpose of managing the crossing of the River Usk. The castle was used as administrative offices for the collection of rent and dues from local tenants, and was also a residence and a garrison. In 1402 it was sacked by Owain Glyndwr. It was in disrepair by 1522, and was taken by Oliver Cromwell's forces during the Civil War. Its use declined further in later centuries. It has been a Grade II Listed building since 1951. The east side is the only part of the castle to survive. It has been a Grade II* Listed building since 1951. An inner ring road was built alongside the castle in 1970. The ruins of the castle were permanently fenced off in 2003, followed by the closure of the public footpath in 2006. It has been closed since 2011, due to safety concerns.In about 1796 J. M. W. Turner made a "picturesque, romantic" painting of the ruin, as did other artists. The castle was the inspiration for the 1911 poem "Days That Have Been" by Newport-born W. H. Davies.

How To Get To Newport Castle (Map):