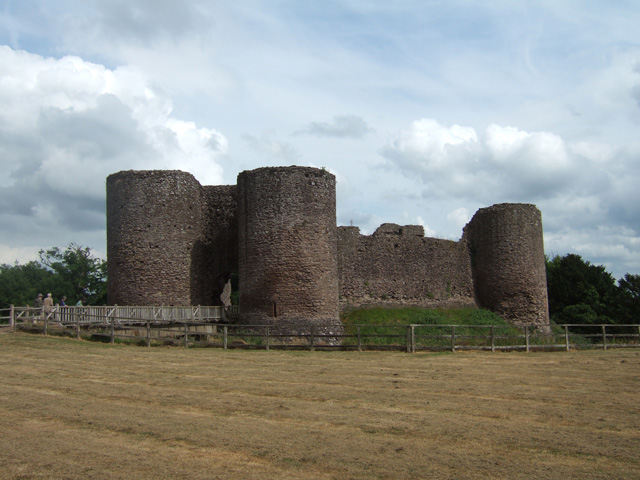 Location: Monmouthshire, Wales.
Built: 11th to 13th century
Condition: Ruins.
Ownership / Access: Cadw.
Opening Times: Check their website for more info.
Price of Admission: Check their website for more info.
Notes: White Castle (Welsh: Castell Gwyn) is a medieval castle located 1 mile (1.6 km) north of the village of Llantilio Crossenny in Monmouthshire, Wales, near the B4233 between Monmouth and Abergavenny. Known as one of the �Three Castles� with Grosmont and Skenfrith, there has been a defensive structure at the site since the late eleventh century. The castle was originally called Llantilio Castle (recorded in the Pipe Rolls in 1186), after Llantilio Crossenny, the medieval manor of which it was a part. The name "White Castle" was first recorded in the thirteenth century, and was derived from the whitewash put on the stone walls. The castle ruins are Grade I listed as at 19 November 1953. White Castle was frequently visited and, apparently, painted by German Deputy F�hrer Rudolf Hess during the period when he was held in Maindiff Court Military Hospital at Abergavenny, between 1942 and his trial in 1945. The castle today stands in partial ruin, although there have been few significant losses to time. The stone walls and towers of the inner and outer ward still stand, although their inner floors are missing, as are portions of the upper level of the walls. A modern wooden bridge spans the moat between the inner and outer ward, and within one tower of the inner gatehouse the stairwell has been restored, allowing access to the top of the tower, and a commanding view of the surrounding countryside. The castle is maintained by Cadw, and access is controlled during the summer months. The rest of the year the castle is an open site, and may be visited at any reasonable time of day.

How To Get To White Castle (Map):