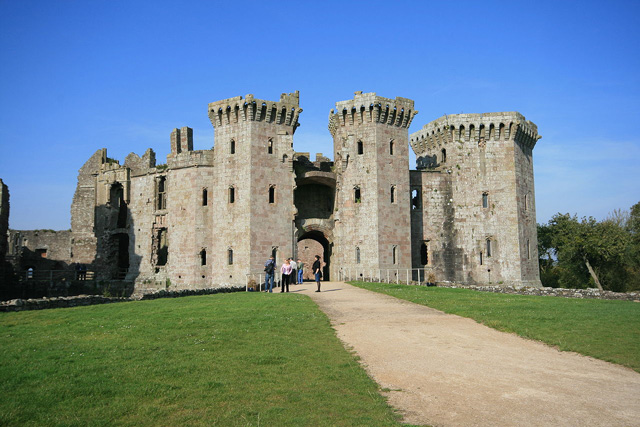 Location: Monmouthshire, Wales.
Built: 15th century.
Condition: Ruined.
Ownership / Access: Cadw.
Opening Times: Check their website for more info.
Price of Admission: Check their website for more info.
Notes: Raglan Castle (Welsh: Castell Rhaglan) is a late medieval castle located just north of the village of Raglan in the county of Monmouthshire in south east Wales. The modern castle dates from between the 15th and early 17th-centuries, when the successive ruling families of the Herberts and the Somersets created a luxurious, fortified castle, complete with a large hexagonal keep, known as the Great Tower or the Yellow Tower of Gwent. Surrounded by parkland, water gardens and terraces, the castle was considered by contemporaries to be the equal of any other in England or Wales. During the English Civil War the castle was held on behalf of Charles I and was taken by Parliamentary forces in 1646. In the aftermath, the castle was slighted, or deliberately put beyond military use; after the restoration of Charles II, the Somersets declined to restore the castle. Raglan Castle became first a source of local building materials, then a romantic ruin, and is now a modern tourist attraction. Today, the castle is classed as a Grade I listed building and as a Scheduled Monument, administered by Cadw.

How To Get To Raglan Castle (Map):