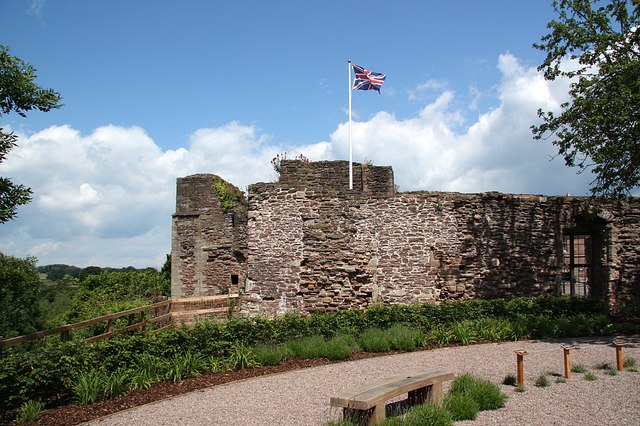 Location: Monmouth, Wales.
Built: 1067.
Condition: Ruined.
Ownership / Access: Headquarters and regimental museum of the Royal Monmouthshire Royal Engineers.
Opening Times: Check their website for more info.
Price of Admission: Check their website for more info.
Notes: Monmouth Castle is a castle in the town of Monmouth, county town of Monmouthshire, south east Wales. It is a Grade I listed building and scheduled monument. Monmouth Castle is located close to the centre of Monmouth on a hill towering over the River Monnow, behind shops and the main square and streets. Once an important border castle, and birthplace of Henry V of England, it stood until the English Civil War when it was damaged and changed hands three times before being slighted to prevent it being fortified again. After partial collapse in 1647, the site was reused and built over by Great Castle House, which became the headquarters and regimental museum of the Royal Monmouthshire Royal Engineers. Only fragments of the castle, including the Great Tower and Hall and parts of the walls, remain above ground, and on the site Castle House and Great House have been built. In 1875, the Royal Monmouthshire Royal Engineers Militia, the senior Territorial Army regiment today, made it their Headquarters building and so it remains. It is one of the few British castles in continuous military occupancy. The Royal Monmouthshire Royal Engineers museum is located in the stable block attached to Great Castle House. It includes exhibits relating to the history of the regiment from 1539 to the present day.

How To Get To Monmouth Castle (Map):