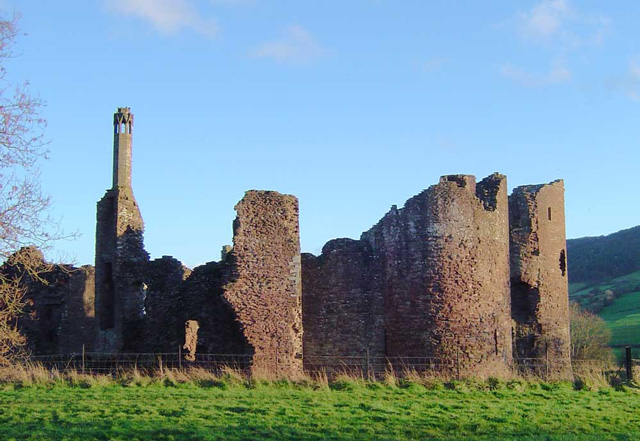 Location: Grosmont, Monmouthshire, Wales.
Built: c.1070-c.1350.
Condition: Ruined.
Ownership / Access: Cadw.
Opening Times: Check their website for more info.
Price of Admission: Check their website for more info.
Notes: Grosmont Castle (historically also spelled Grisemount and Grisemond) is a ruined castle in Grosmont, Monmouthshire, Wales, very near the border with Herefordshire, England, and overlooking a bend in the River Monnow. It is generally considered to have been largely built by Hubert de Burgh early in the 13th century, on an earlier Norman foundation, but was extended in the 14th century. It is located about 11 miles (18 km) north-east of Abergavenny, 11 miles (18 km) north-west of Monmouth, and 15 miles (24 km) south-west of Hereford. The castle ruins are Grade I listed as of 1 September 1956.The site is managed by Cadw, and is open without charge on every day of the year except for 24, 25, 26 December and 1 January. A lane, opposite St Nicholas' church, near the Post Office in Grosmont village, leads north to the castle.

How To Get To Grosmont Castle (Map):