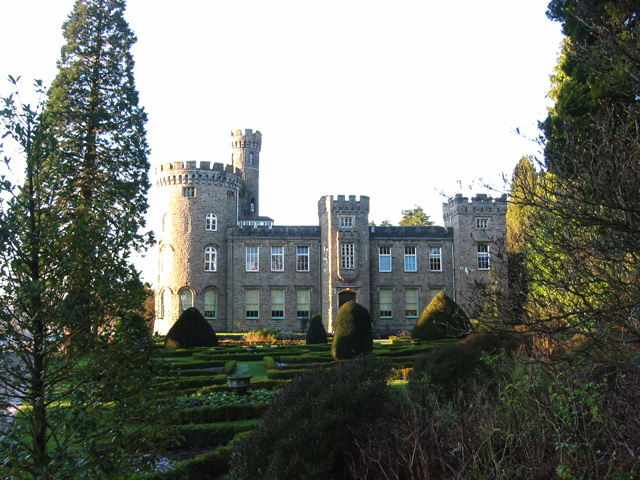 Location: Park, Merthyr Tydfil, Wales.
Built: 19th century.
Condition: Intact.
Ownership / Access: Merthyr Tydfil County Borough Council..
Notes: Cyfarthfa Castle (Welsh: Castell Cyfarthfa) is the former home of the Crawshay family, historical ironmasters of Cyfarthfa Ironworks in Park, Merthyr Tydfil, Wales. The house commanded a perfect view of the valley and the works, which 'at night, offer a truly magnificent scene, resembling the fabled Pandemonium, but on which the eye may gaze with pleasure'. Cyfarthfa loosely translates from the Welsh for 'place of barking'. The reason is hunting dogs were regularly heard in this area of the town, hunting polecats and weasels among others. Despite appearing superficially to be a fortified building it is a house built in the style of a large mansion with a large kitchen, bake house and dairy; a billiard room, library and a range of stunningly decorated reception rooms. As well as a brew house, icehouse and extensive storage cellars, containing over 15,000 individual bottles of wines and spirits such as Sherry, Champagne, Whiskey, Brandy, Madeira Wine, and over 7,500 bottles of port alone, were all stored here. Adjoining the building were also stable blocks and coach houses. The castle stands in 158-acre (64 ha) of parkland, now called Cyfarthfa Park and maintained by Merthyr Tydfil County.


The park is one of the best visitor attractions in South Wales. Not only do you have acres of stunning walks, there is also a miniature steam railway run by Merthyr Tydfil Model Engineering Society since 1987. A Canolfan Cyfarthfa, which has function rooms and a seasonal cafe, a wonderful childrens playground complete with an incredible 'Splash Pad', a 9-hole golf course, bowling grounds and tennis courts, and an extensive fishing lake. The park also hosts a varied calendar of events throughout the year such as car shows, horse shows and concerts. On 30 June 2007, Donny Osmond, who traces his family history to Merthyr Tydfil, performed the 'Donny Comes Home' concert in the park grounds. The concert was attended by 15,000 people despite unseasonal heavy rain. On 26 July 2008, Status Quo performed in the park grounds. The Museum and Art Gallery are set in restored Regency rooms and contain a superb collection of family memorabilia, fine and decorative are, curios from around the world and social history material. The Playroom is the Castles temporary exhibition space. When the Crawshay family lived there the room had a very different purpose. This was one of several rooms that were solely for use of the Crawshay children hence the name Playroom. William Crawshay had many children and he adored having his children close, which is why all the children's areas of the house surround his office. 'The Playroom' hosts a wide variety of temporary exhibitions each year, from contemporary and classical art exhibitions, to community and social history exhibitions.


How To Get To Cyfarthfa Castle (Map):