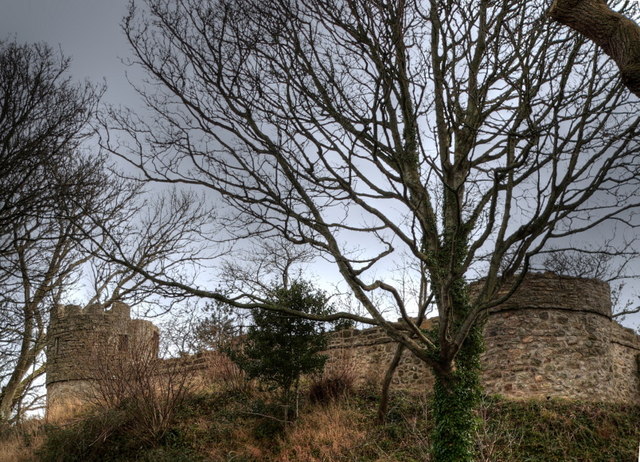 Location: Llangoed on the Isle of Anglesey, Wales.
Built: between 1080 and 1099.
Condition: Ruined. Currently being restored.
Ownership / Access: --.
Notes: Castell Aberlleiniog (Castle of the River Lleiniog) is a motte and bailey fortress near the Welsh village of Llangoed on the Isle of Anglesey, built between 1080 and 1099 by Hugh d'Avranches, 1st Earl of Chester. It is about two miles distant from Beaumaris Castle, and was built atop a very steep hill. There are few historical documents that detail the events the castle has seen through its life, however some do survive, including a record of a siege in 1094 by Gruffudd ap Cynan. The siege was unsuccessful, though 124 Norman defenders died in the battle. The original Norman timber structure is long gone, replaced by a stone structure at some point prior to the mid-17th century, when it was destroyed by Thomas Cheadle, the constable of Beaumaris. The site is currently being restored and is partially open to the public. The keep had broad ramparts fronted by a narrow wall rising to a parapet; each corner contained a round tower, the remains of which can still be seen.

How To Get To Castell Aberlleiniog (Map):

Castell Aberlleiniog On Wikipedia
Royal Commission on the Ancient and Historical Monuments of Wales
Welsh Castles: A Guide by Counties