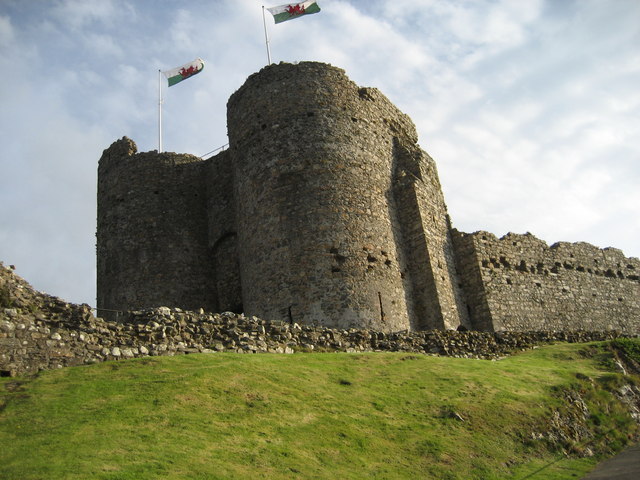 Location: Criccieth, Gwynedd, in North Wales.
Built: c.1230-1280s,
Condition: Ruin.
Ownership / Access: Cadw.
Opening Times: Check their website for more info.
Price of Admission: Check their website for more info.
Notes: Criccieth Castle (Welsh: Castell Cricieth) is a native Welsh castle situated on the headland between two beaches in Criccieth, Gwynedd, in North Wales, on a rocky peninsula overlooking Tremadog Bay. It was built by Llywelyn the Great of the kingdom of Gwynedd but it was heavily modified following its capture by English forces of Edward I in the late 13th century. A Motte and bailey stood at a different site in Criccieth before the masonry castle was built. In 1283 the castle was captured by English under the command of Edward I. It was then remodelled by James of St George. In 1294, Madoc ap Llywelyn, a distant relation of Llywelyn ap Gruffudd, began an uprising against English rule that spread quickly through Wales. Several English-held towns were razed and Criccieth (along with Harlech Castle and Aberystwyth Castle) were besieged that winter. Its residents survived until spring when the castle was resupplied. In the 14th century the castle had a notable later constable called Hywel ap Gryffd who fought for Edward III at the Battle of Crecy in 1346. The castle was used as a prison until 1404 when Welsh forces captured the castle during the rebellion of Owain Glyndwr. The Welsh then tore down its walls and set the castle alight. Some stonework still show the scorch marks. Criccieth was also one of several locations Romantic artist Joseph Mallord William Turner used for his famous series of paintings depicting shipwrecked mariners.

How To Get To Criccieth Castle (Map):