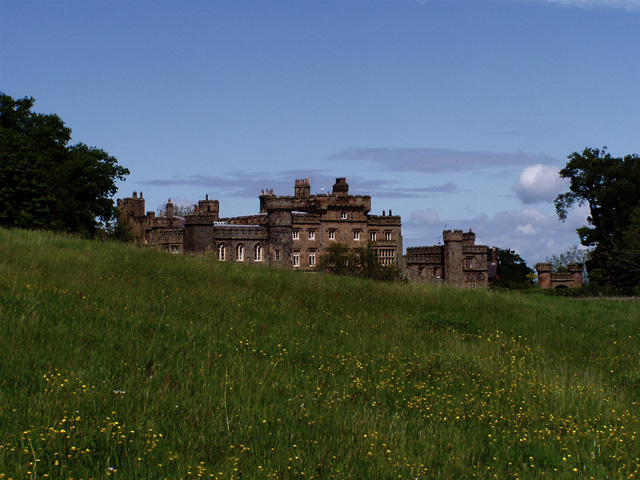 Location: Hawarden, Flintshire, Wales.
Built: mid-18th century.
Condition: Restored.
Ownership / Access: Private residence. (some of the grounds are open to the public)
Opening Times: Check their website for more info.
Price of Admission: Check their website for more info.
Notes: New Hawarden Castle is a house in Hawarden, Flintshire, Wales. It was the estate of former British Prime Minister William Ewart Gladstone, having previously belonged to the family of his wife, Catherine Glynne. Built in the mid-18th century, it was later enlarged and externally remodelled in the Gothic taste. The core of present house is formed by a mansion built in 1752-7 for Sir John Glynne, 6th baronet, to the designs of Samuel Turner the elder of Whitchurch. It replaced the 16th century Broadlane Hall, the seat of the Ravenscroft family, which stood some way to the south. Glynne had acquired the estate through marriage. The new house was of brick with stone dressings. The main block was three storeys high, and seven bays wide, with a projecting three bay central pediment. Two flanking side pavilions were planned but may not have been completed. In 1809-10 Sir Stephen Glynne, 9th Baronet, had the house enlarged, and the exterior completely remodelled in a crenellated Gothic Revival style, by the London architect Thomas Cundy the elder, although the Georgian interiors were preserved. In around 1830 the main entrance was moved from the south side to the north, and vaulted porch added. There were further alterations to the house during Gladstone's occupancy, including a wing housing a library, designed by George Shaw of Saddleworth, built in the mid-1860s, a muniment room for the storage of his papers (1887-8), and an enlarged porch (1889), these last two both by Douglas and Fordham. In 1896 the then Archbishop of Canterbury, Edward Benson died at the castle and his body was put on the train at nearby Sandycroft station to be returned to London. Gladstone occupied the house until his death there in 1898, when it was inherited by his eldest son, William Henry Gladstone, who was High Sheriff of Flintshire for 1888. On the death of William Henry Gladstone it passed to his son William Glynne Charles Gladstone, who was killed in the First World War. The estate was subsequently purchased by his uncle Henry Gladstone, 1st Baron Gladstone of Hawarden. The house and estate are still a private residence (although some of the grounds are open to the public) and are still owned by the Gladstone family (the current proprietor is Sir William Gladstone). In its grounds are the ruins of a medieval castle, Hawarden Castle. The house is designated at Grade I by Cadw.

How To Get To Hawarden Castle (Map):