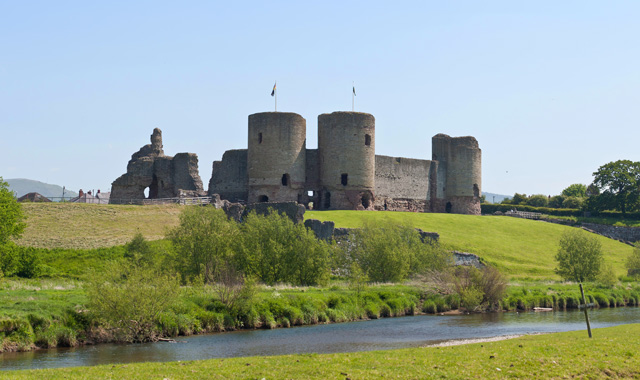 Location: Denbighshire, Rhuddlan, Wales.
Built: From 1277 to 1282.
Condition: Ruin.
Ownership / Access: Cadw.
Opening Times: Check their website for more info.
Price of Admission: Check their website for more info.
Notes: Rhuddlan Castle (Welsh: Castell Rhuddlan) is a castle located in Rhuddlan, Denbighshire, Wales. It was erected by Edward I in 1277 following the First Welsh War. Rhuddlan was planned as a concentric castle. It has a unique 'diamond' in layout as the gatehouses are positioned at the corners of the square baileys instead of along the sides like at Flint, Harlech or Beaumaris. The inner ward has defensive walls with twin-tower gatehouses. The outer ward is surrounded by a curtain wall that has small towers and turrets. The castle also had a dry moat to improve defence on its landward side. Within the inner ward there was a great hall, kitchens, private apartments and a chapel. The outer bailey had a granary, stables and a smithy. Much of the work was overseen by master mason James of St George. Rhuddlan, which was not completed until 1282, was built concurrently with Flint Castle. Rhuddlan is next to the River Clwyd. During the fortification's lengthy construction, the river course was straightened and dredged to allow ships to sail inland along a man-made channel. Its purpose was to allow provisions and troops to reach the castle even if hostile forces or a siege prevented overland travel. Today Rhuddlan Castle is managed by Cadw, a Welsh-government body with the mission to protect, conserve and promote the building heritage of Wales.

How To Get To Rhuddlan Castle (Map):