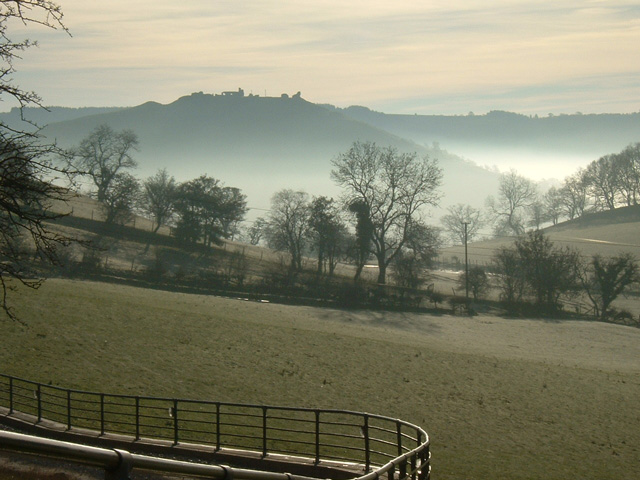 Location: Llangollen in Denbighshire, Wales.
Built: 12th century,
Condition: Ruin.
Ownership / Access: Denbighshire council.
Notes: Castell Dinas Bran is a medieval castle standing high on a hill above the town of Llangollen in Denbighshire, Wales. It is also the site of an Iron Age hill fort. There is also a British Rail Class 25 named after this castle, it has been preserved on the Great Central Railway (heritage railway) and its number is D5185. The first building placed at Dinas Bran was not the castle which now stands in ruins on top of the hill but an Iron Age hillfort built around 600 BC. An earthen rampart was constructed probably topped by a wooden palisade and this was further protected by a deep ditch on the shallower southern slope. The walls of the hill fort encircled a village of roundhouses. Dinas Bran is one of many hill forts in this part of Wales; Moel y Gaer is just a couple of miles to the north-west near the Horseshoe Pass, and another is close by at Y Gardden in Ruabon to the east. There are many others on the Clwydian Hills further to the north and in the Marches to the south.(Kightly, 2003). The castle may be approached from two directions. From Llangollen the path starts from Canal Bridge and runs beside Ysgol Dinas Bran. It gradually climbs past several cottages before opening out onto the lower slopes of the hill. A zig-zag path then climbs to the summit. The other route starts from 'Offa's Dyke Path' on the north western side of the hill. This route is shorter but steeper. Official advice is to equip yourself with stout walking shoes and warm, waterproof clothing before climbing to the castle. The castle is a scheduled ancient monument owned and maintained by Denbighshire council with the assistance of Cadw.

How To Get To Castell Dinas Bran (Map):