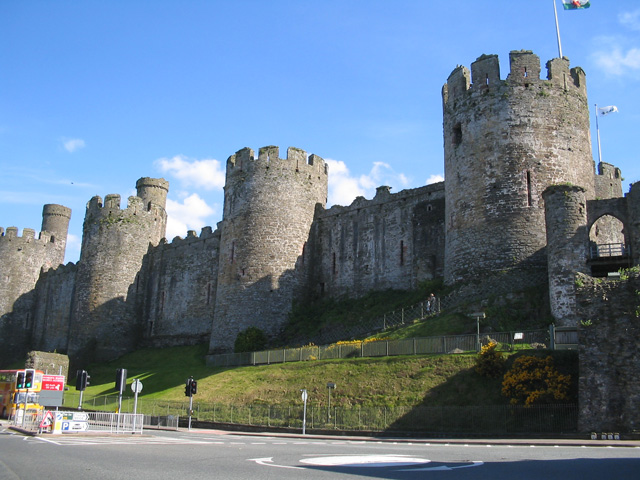 Location: Conwy, Wales.
Built: 1283-89.
Condition: Ruined.
Ownership / Access: Cadw.
Opening Times: Check their website for more info.
Price of Admission: Check their website for more info.
Notes: Conwy Castle (Welsh: Castell Conwy, English: Conway Castle) is a medieval fortification in Conwy, on the north coast of Wales. It was built by Edward I, during his conquest of Wales, between 1283 and 1289. Constructed as part of a wider project to create the walled town of Conwy, the combined defences cost around £15,000, a huge sum for the period. Over the next few centuries, the castle played an important part in several wars. It withstood the siege of Madog ap Llywelyn in the winter of 1294-95, acted as a temporary haven for Richard II in 1399 and was held for several months by forces loyal to Owain Glyndwr in 1401. Following the outbreak of the English Civil War in 1642, the castle was held by forces loyal to Charles I, holding out until 1646 when it surrendered to the Parliamentary armies. In the aftermath the castle was partially slighted by Parliament to prevent it being used in any further revolt, and was finally completely ruined in 1665 when its remaining iron and lead was stripped and sold off. Conwy Castle became an attractive destination for painters in the late 18th and early 19th centuries. Visitor numbers grew and initial restoration work was carried out in the second half of the 19th century. In the 21st century the ruined castle is managed by Cadw as a tourist attraction. UNESCO considers Conwy to be one of "the finest examples of late 13th century and early 14th century military architecture in Europe", and it is classed as a World Heritage site. The rectangular castle is built from local and imported stone and occupies a coastal ridge, originally overlooking an important crossing point over the River Conwy. Divided into an Inner and an Outer Ward, it is defended by eight large towers and two barbicans, with a postern gate leading down to the river, allowing the castle to be resupplied from the sea. It retains the earliest surviving stone machicolations in Britain and what historian Jeremy Ashbee has described as the "best preserved suite of medieval private royal chambers in England and Wales". In keeping with other Edwardian castles in North Wales, the architecture of Conwy has close links to that found in the kingdom of Savoy during the same period, an influence probably derived from the Savoy origins of the main architect, James of Saint George.

How To Get To Conwy Castle (Map):