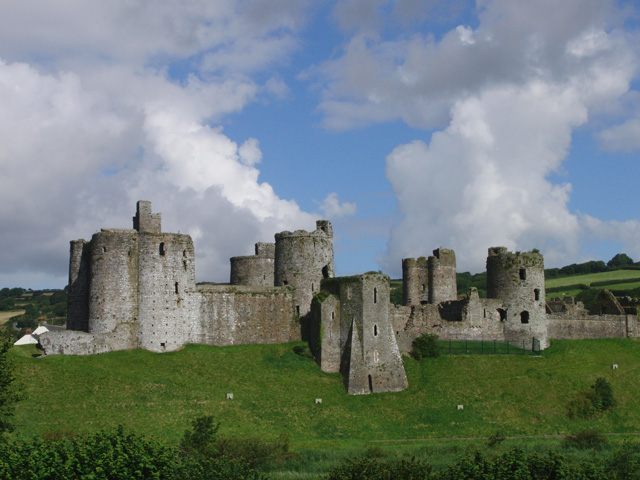 Location: Kidwelly, Carmarthenshire, Wales.
Built: 12th century and earlier.
Condition: Ruined.
Ownership / Access: Cadw.
Notes: Kidwelly Castle (Welsh: 'Castell Cydweli') is a Norman castle overlooking the River Gwendraeth and the town of Kidwelly, Carmarthenshire, Wales. The present remains of the castle include work from about 1200 to about 1476. Created as a defence against the Welsh, the castle fell to the Welsh several times in the twelfth century. Later in its history, it was unsuccessfully besieged by forces of Owain Glyndwr in 1403 with assistance from soldiers from France and Brittany who captured Kidwelly town. The castle was relieved by a Norman army after just three weeks. The gatehouse was extensively damaged and it was rebuilt on the instructions of King Henry V. It largely escaped involvement in the English Civil War. The plan of the castle consists of a square inner bailey defended by four round towers, which overlook a semi-circular outer curtain wall on the landward side, with the massive gatehouse next to the river. The river prevents this from being a truly concentric plan, however a jutting tower protects the riverside walls, and the final plan is very strong. Kidwelly was used as a location for the film Monty Python and the Holy Grail, appearing in the very first scene after the titles. After the first view of King Arthur and Patsy, a very misty establishing shot shows Kidwelly as their destination. However, the following close up filming was done at Doune Castle in Scotland. The castle is relatively well-preserved, and is managed by Cadw. The surrounding countryside is reputedly haunted by the headless ghost of Gwenllian ferch Gruffydd, wife of the Welsh prince Gruffydd ap Rhys, who was beheaded in 1136.

How To Get To Kidwelly Castle (Map):