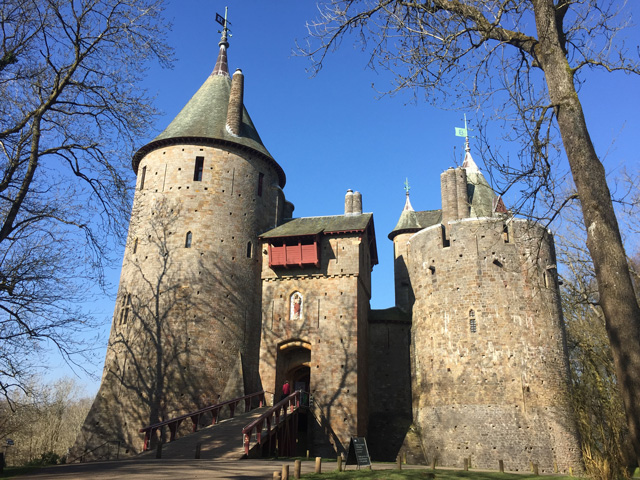 Location: Tongwynlais, Cardiff, Wales.
Built: Originally 11th century.
Condition: Intact.
Ownership / Access: Cadw.
Opening Times: Check their website for more info.
Price of Admission: Check their website for more info.
Notes: Castell Coch is a 19th-century Gothic Revival castle built above the village of Tongwynlais in South Wales. The first castle on the site was built by the Normans after 1081, to protect the newly conquered town of Cardiff and control the route along the Taff Gorge. Abandoned shortly afterwards, the castle's earth motte was reused by Gilbert de Clare as the basis for a new stone fortification, which he built between 1267 and 1277 to control his freshly annexed Welsh lands. This castle was likely destroyed in the native Welsh rebellion of 1314. In 1760, the castle ruins were acquired by John Stuart, 3rd Earl of Bute as part of a marriage settlement that brought the family vast estates in South Wales. John Crichton-Stuart, the 3rd Marquess of Bute, inherited the castle in 1848. One of Britain's wealthiest men, with interests in architecture and antiquarian studies, he employed the architect William Burges to reconstruct the castle, "as a country residence for occasional occupation in the summer", using the medieval remains as a basis for the design. Burges rebuilt the outside of the castle between 1875 and 1879, before turning to the interior; he died in 1881 and the work was finished by Burges's remaining team in 1891. Bute reintroduced commercial viticulture into Britain, planting a vineyard just below the castle, and wine production continued until the First World War. The Marquess made little use of his new retreat and in 1950 his grandson, the 5th Marquess of Bute, placed it into the care of the state. It is now controlled by the Welsh heritage agency Cadw. Castell Coch's external features and the High Victorian interiors led the historian David McLees to describe it as "one of the greatest Victorian triumphs of architectural composition." The exterior, based on 19th-century studies by the antiquarian George Clark, is relatively authentic in style, although its three stone towers were adapted by Burges to present a dramatic silhouette, closer in design to mainland European castles such as Chillon than native British fortifications. The interiors were elaborately decorated, with specially designed furniture and fittings; the designs include extensive use of symbolism drawing on classical and legendary themes. Joseph Mordaunt Crook wrote that the castle represented "the learned dream world of a great patron and his favourite architect, recreating from a heap of rubble a fairy-tale castle which seems almost to have materialised from the margins of a medieval manuscript." The surrounding beech woods contain rare plant species and unusual geological features and are protected as a Site of Special Scientific Interest.

How To Get To Castell Coch (Map):