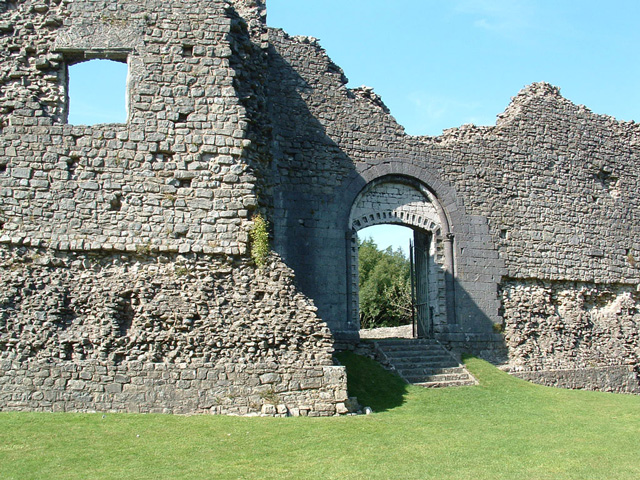 Location: Bridgend in Glamorgan, Wales.
Built: 1106 .
Condition: Ruins.
Ownership / Access: --
Opening Times: Check their website for more info.
Price of Admission: Check their website for more info.
Notes: Newcastle Castle is a medieval castle located on Newcastle Hill, overlooking the town centre of Bridgend in Glamorgan, South Wales. It was originally believed to date from 1106 when a ringwork was created at the site by the Norman baron Robert Fitzhamon. Today it is ruinous.Newcastle Castle was initially constructed as a ringwork 1106 by William de Londres, one of the legendary Twelve Knights of Glamorgan, as part of the Norman invasion of Wales. William de Londres was a knight loyal to the Norman baron Robert Fitzhamon and the Newcastle defences marked the most western extent of Fitzhamon's lordship. It is one of three castles built by the Normans in the area at the time, the others being Coity Castle and Ogmore Castle. The defences were strengthened either by William Fitz Robert, 2nd Earl of Gloucester, shortly before his death in 1183 or by Henry II who took over the lordship of Glamorgan on William's death. The additional works saw the construction of a 2m thick curtain wall which surrounded a courtyard which was 40m in length. The main reason behind these new defences was believed to be a response to the uprising in Glamorgan led by the Welsh Lord of Afan, Morgan ap Caradog. Henry died in 1189 and the ownership of Newcastle fell to Prince John, who that year handed the castle to Morgan ap Caradog. When Morgan died c1208, he was succeeded by his son Lleison.[2] On Lleison's death, thought to be around 1214, the castle came into the ownership of Isabel, Countess of Gloucester, the first wife of King John.[1] In 1217 the ownership changed again, staying briefly with the Anglo-Norman baron Gilbert Fitz Richard, who in the same year handed the castle over to Gilbert de Turberville. The castle passed through three families. The three families being the Turberville family, the Berkerolle family and also the Gamage family. It was bought by Samuel Edwin of Llanmihangel Place and later became part of Dunraven Estate.

How To Get To Newcastle Castle (Map):