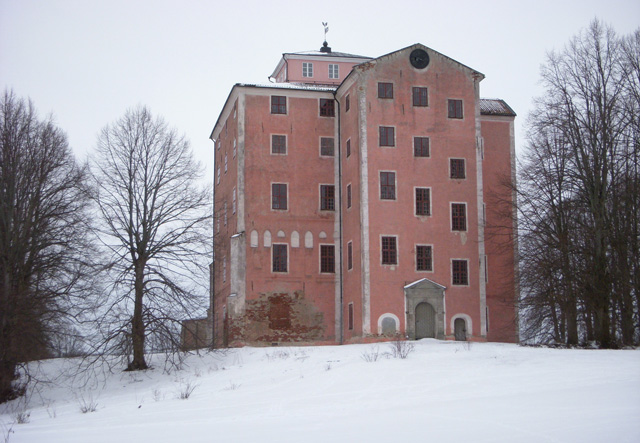 Location: Strangnas Municipality, Sweden.
Built: 1590s.
Condition: Intact.
Ownership / Access: Property of the Royal Swedish Academy of Letters History and Antiquities.
Notes: Tynnelso Castle (Swedish: Tynnelso slott) is a castle in Sweden. It is located on Tynnelso island in Lake Malaren, a few kilometres north-east of Strangnas. The castle was built during the Middle Ages by the bishops of Strangnas.The oldest parts of Tynnelso Castle probably date from the 13th century. The castle is mentioned in written sources for the first time in 1282. From 1306, the estate belonged to the Diocese of Strangnas and the castle was the property of the bishop. The castle was continuously expanded during the Middle Ages. During the time of bishop Thomas Simonsson, the castle is mentioned as one of the strongest in Sweden. A preserved list of inventories from 1443 lists the weapons housed in the castle at the time: 24 firearms, including several cannon, 52 crossbows, a barrel of crossbow bolts and 150 cannon balls. In the time of bishop Sigge (1449-63), the castle had a garrison of 100 men. The castle saw action during the Swedish War of Liberation. It was besieged and conquered by the troops of Gustav Vasa and later used by his army as an arsenal during the siege of Stockholm. In 1527, it was confiscated by the crown of Sweden and turned into a crown estate. Gustav Vasa spent time there on several occasions, and his wife Margareta Leijonhufvud died at Tynnelso Castle in 1551. After the death of Gustav Vasa, the castle passed to his widow Katarina Stenbock and then to Duke Charles of Sodermanland, the future Charles IX of Sweden, who started transforming it from a medieval castle to a Renaissance palace. He gave the castle as a gift to his first wife, the Maria of Simmern and, after her death, likewise to his second wife Christina of Holstein-Gottorp. Eventually it passed to his son Charles Philip, Duke of Sodermanland. It was then inherited by his daughter Elizabeth Carlsdotter Gyllenhielm. It stayed in her family until the late 17th century, when it became the property of queen Hedvig Eleonora of Holstein-Gottorp. In 1725, it was given to a Polish noblewoman, Anna Woynarowska nee Mirowicz, who was niece-in-law of Ivan Mazepa, as payment for a debt that king Charles XII had to her husband. Anna Woynarowska however left Sweden in 1748, after which the castle was sold to the brothers Fredrik Willhelm and Carl Edward, Princes von Hessenstein, sons of Frederick I of Sweden and Hedvig Taube. In 1779, the castle was sold and during most of the 19th century passed between different owners. In 1940, it became the property of the Royal Swedish Academy of Letters, History and Antiquities, who initiated a renovation scheme.