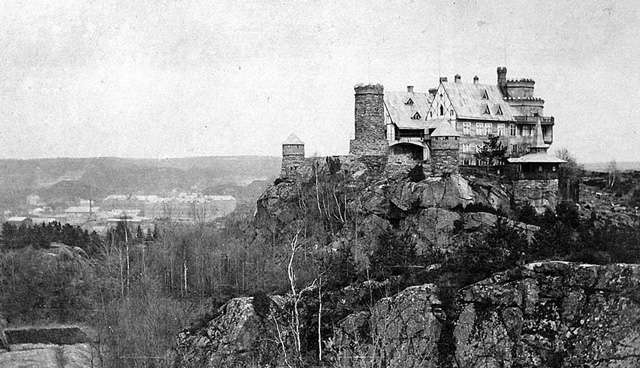 Location: Uddevalla Municipality, Sweden.
Built: 1899.
Condition: Ruin.
Ownership / Access: --
Notes: Tureborg Castle is a mock castle constructed during the late 19th century and early 20th century. Located in Uddevalla Municipality, Sweden, it sits atop a hill overlooking a neighbourhood named for it, Tureborg. Today a ruin after a fire In the 21st century, the castle is prominent among the city's landmarks. Despite this, the area has only irregularly been taken care of, with the ruins facing slow decay, overgrowth, and vandalism. In September 2014 a newly formed group, the Tureborgen Society (Swedish: Sallskapet Tureborgen) set out to start maintaining the castle. On 22 September a first round of maintenance began, with minor repairs made and encroaching vegetation removed.in the 1950s, the castle remains a prominent landmark in Uddevalla.

How To Get To Tureborg Castle (Map):