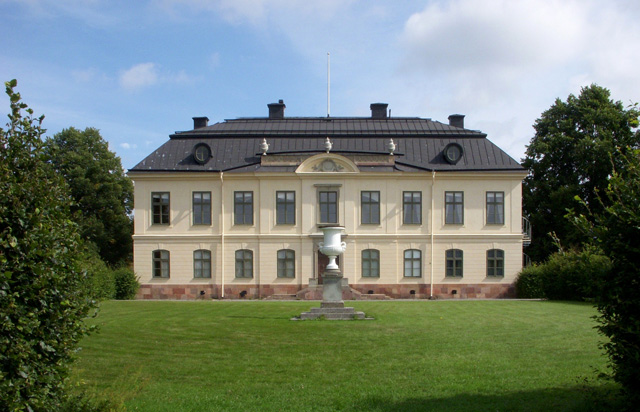 Location: Botkyrka Municipality, Sweden.
Built: 1780.
Condition: Intact.
Ownership / Access: Museum.
Notes: Sturehov Manor (Swedish: Sturehovs slott; sometimes Sturehof) is a manor house in Botkyrka Municipality, a suburb of Stockholm, Sweden. The manor contains well-preserved 18th-century interiors.Sturehov is located in an area which has been inhabited for a long time. In the Middle Ages, a small hamlet called Averhulta lay here, owned at one time by the head of the royal council, Bo Jonsson, and later by the Sture family. Sturehov derives its name from statesman Svante Stensson Sture, who seems to have been the first owner of the estate as such; the name was changed from Averhulta in his honour in the 1680s. In 1562 he acquired the land in an exchange with the Crown. The estate stayed in the Sture family until the death of Ebba Mauritzdotter Leijonhufvud, nee Sture, after whose death it passed to statesman Johan Oxenstierna. Johan Oxenstierna's widow, Margareta Brahe, sold the estate to military commander Carl Gustaf Wrangel. Subsequently it belonged to several other families from the Swedish nobility, until it was bought in 1778 by Johan Liljencrantz, who held a position similar to that of a finance minister in the government of Gustav III. Johan Liljencrantz commissioned the building of the presently visible manor house and gardens. After the death of Liljencrantz the estate was sold again, and passed through different hands until it in 1899 was sold to Stockholm Municipality. The manor had suffered neglect and disrepair for most of the 19th and early 20th centuries. It underwent a renovation in 1954-59 in which the 18th century interiors were restored, resulting in a state of perfection which may never have existed in the original buildings.