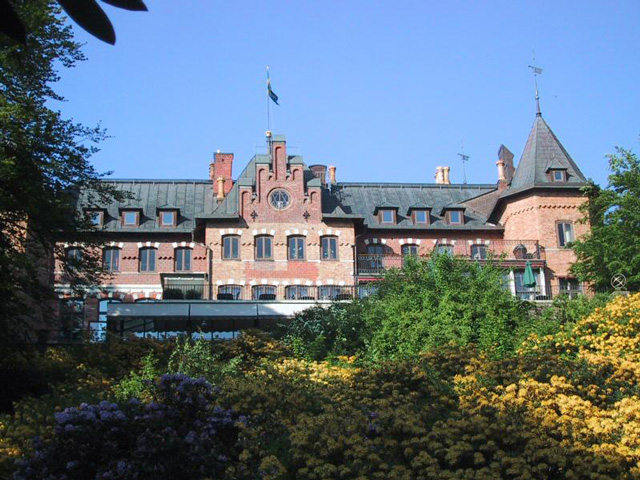 Location: Helsingborg Municipality, Sweden.
Built: 1865.
Condition: Intact.
Ownership / Access: Restaurant, cafe and at times as a gallery.
Notes: Sofiero Castle or just Sofiero (Swedish: Sofiero slott or just Sofiero) in Helsingborg Municipality, Scania, was one of the Swedish royal family's country mansions, located 5 kilometres (3.1 mi) north of Helsingborg. It was originally a Scanian farm called Skabelycke, bought in 1864 by Crown Prince Oscar of Sweden and his wife Sophia of Nassau. The first one-story palace was completed in 1865. It was expanded to its current size between 1874 and 1876, after crown prince Oscar had been crowned king Oscar II of Sweden and Norway.A bus connection leaves several times an hour during peak hours from Helsingborg. The main attraction today is the very large gardens with a wide range of local (and other) plant life, stretching to the shore of Oresund. The Rhododendrons are especially noteworthy, consisting of almost 500 different varieties. The park also holds a small collection of modern art. During the summer the large grass areas are sometimes used for large outdoor concerts with national as well as international stars such as Bob Dylan and Bryan Adams. The castle itself is today used as restaurant, cafe and at times as a gallery. A brand of beer owned by Kopparbergs Brewery is named "Sofiero".

How To Get To Sofiero Castle (Map):