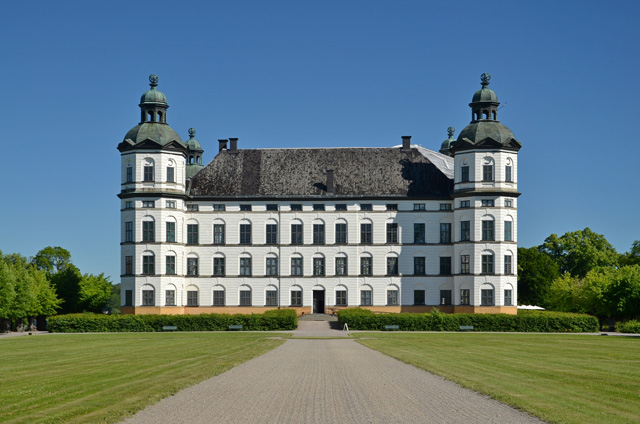 Location: Uppland Sweden.
Built: 1676.
Condition: Intact.
Ownership / Access: Museum.
Opening Times: Check their website for more info.
Price of Admission: Check their website for more info.
Notes: Skokloster Castle is located on Lake Malaren between Stockholm and Uppsala. It was built in the Baroque style between 1654 and 1676 by the wealthy military commander count Carl Gustaf Wrangel. The castle was designed mainly by architect Caspar Vogel, but other architects involved were Jean de la Vallee and Nicodemus Tessin the Elder. When Wrangel died, the castle passed into the hands of the Brahe family. In 1967 the castle and its contents were sold by the family to the Swedish government; the family still resides in the vicinity.The castle is a monument to the Swedish Age of Greatness, a period in the middle of the 17th century when Sweden expanded to became one of the major powers in Europe. The death of Wrangel in 1676 meant that the castle was never truly completed. The Brahe family who inherited the castle after Wrangel's death, had their own family castles and did not complete the interiors. Thus the large banqueting hall remains largely in the same condition as the builders left it in the summer of 1676. It is now called the Unfinished Hall. Skokloster Castle is the only building in Europe with a complete 17th-century building site of equal authenticity. Alongside the Unfinished Hall there are a number of other related items from the same period, as several hundred tools and about a dozen books on construction. The much needed renovation that was made in the 1970s by architect Ove Hidemark constitutes a benchmark in Swedish conservation techniques. Hidemark then used the same materials and building techniques as used in the 17th century. The interiors of the castle are considered to be especially well preserved, considering it is a building without modern heating in a cold climate. There are, however, some small issues of mould and damage to the collections, especially to the paintings, and there have been problems with leakage from the roof. A thorough renovation of the roof is currently under way; the second stage of the renovation commence in March 2015. The painting Vertumnus by Arcimboldo is part of the castle collection. The other, finished, parts of the castle displays the full, sumptuous splendour of the Baroque. The castle's detailed chambers are home to remarkable collections of paintings as well as furniture, textiles and silver and glass tableware. One of the most famous paintings is the 16th century Vertumnus by Italian master Giuseppe Arcimboldo. It pictures the face of Holy Roman emperor Rudolf II as the Roman god of the seasons using fruits and vegetables. The painting was taken as war booty in Prague in the 17th century.

How To Get To Skokloster Castle (Map):