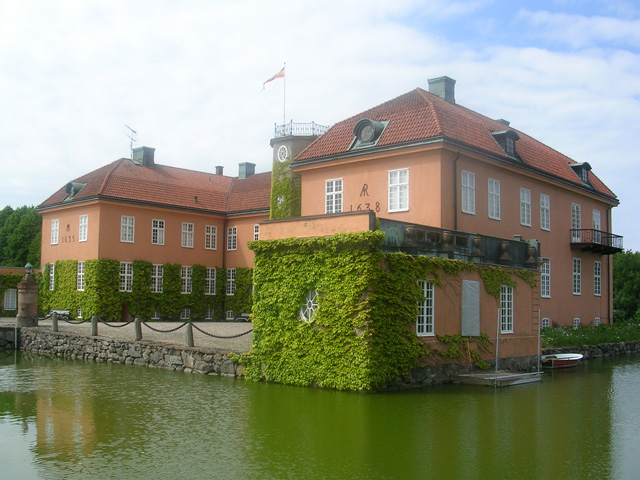 Location: Kristianstad Municipality, Sweden.
Built: 1780.
Condition: Intact.
Ownership / Access: Private residence.
Notes: Maltesholm Castle (Swedish: Maltesholms slott) is a large manor house located in Kristianstad Municipality, Scania, in southern Sweden. The castle has been passed down for generations and is now the private residence of the Baron Palmstierna. The beautiful garden is open to the public.The castle was originally constructed between 1635 and 1638 by the high constable of Kristianstad, Malte Juel, during the Danish rule of Scania, but the history of the estate goes back to the Middle ages and it was owned by the Brahe family. Typical for its time, the castle was a Renaissance manor built in brick with three floors, a staircase tower with an elaborate spire, two crow-stepped gables and surrounded by a large moat. During the life of Lord Malte Ramel (d. 1752), one of the richest men in Sweden of the time, the domains were greatly expanded. His son Hans Ramel began reconstructing the castle according to the style of the late 18th century. It was completed in 1780 in the style of Swedish classical palace; the only remains of the Renaissance castle are the moat and the year "1680" marked on the facade. Hans Ramel also constructed a 1.3 kilometres (0.81 mi) long stone road leading up to the Mansion through the undulating landscape. The road had to be even and it took almost 50 years to complete. The labourers had to bring a rock every day to the Manor for the construction and there was a grateful saying amongst the workers: If it wasn't for the Folly of a Rich man there wouldn't be bread for the Poor.

How To Get To Maltesholm Castle (Map):