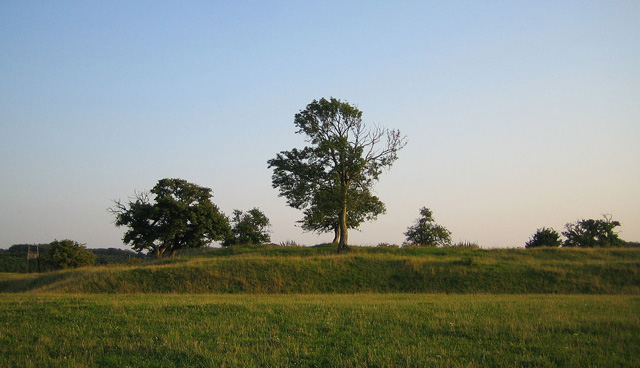 Location: Svedala Municipality, Scania, Sweden.
Built: 13th century.
Condition: Ruin.
Ownership / Access: --
Notes: Lindholmen Castle is a former Danish fortified castle on the banks of lake Borringe in Svedala Municipality, Scania, southern Sweden. Lindholmen became an important fortification in the defence of Scania during the Middle Ages because of its strong encircling defensive walls and double moats. At the time, a small river and treacherous marshes made the terrain surrounding the castle hard to navigate. Originally a private castle, it was in 1339 turned over to Magnus Eriksson, king of Sweden, Norway and Scania. In 1395, Margaret I of Denmark used the castle to conduct peace negotiations with the deposed king of Sweden, Albrecht von Mecklenburg, who had been forced to give up the Swedish throne in her favor. The meeting at Lindholmen to determine Albrecht's fate lasted 16 days and was attended by so many participants that tents had to be erected on the castle grounds to accommodate them. Before the negotiations in 1395, the Swedish king had been held prisoner in Lindholmen Castle for close to seven years. He was captured and taken there following his defeat at the battle of Falkoping in 1389. During his imprisonment, the Danish queen was the de facto ruler of Sweden.During the 15th century, the castle's importance waned. It was torn down in the 16th century in order to provide building material for Malmohus Castle. When Scania became Swedish in 1658, Charles X Gustav gave Lindholmen estate, along with Borringe Abbey, to his son Gustaf Carlson. During the reduction, Lindholmen became crown property and was leased out. In 1723, Lindholmen and Borringe Abbey were bought by Erasmus Clefwe and in 1827 the joined estates were divided into smaller pieces and sold off.

How To Get To Lindholmen Castle (Map):