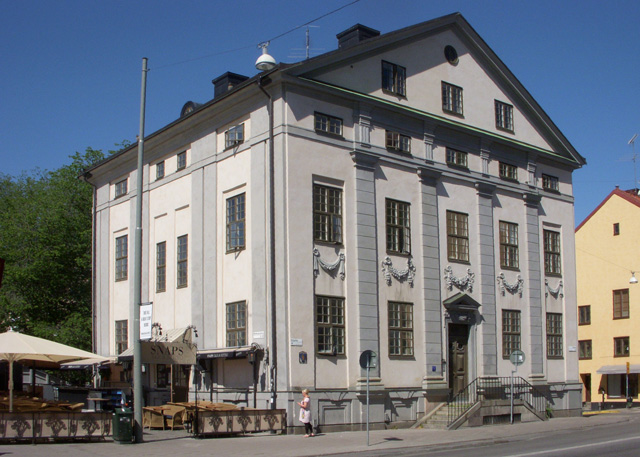 Location: Stockholm, Sweden.
Built: 1670.
Condition: Intact.
Ownership / Access: Restaurant, offices, apartments.
Notes: The Lillienhoff Palace (Swedish Lillienhoffska paltset) is a building located on a corner of the large square Medborgarplatsen in southcentral Stockholm. It was built in 1668-1670 by merchant Joachim Potter who was ennobled under the name of Lillienhoff. Blueprints were by Johan Tobias Albinus. The facades are decorated with motifs from Dutch baroque, as was commom in Stockholm's palace architecuire in the middle of the 17th century. The palace originally had a garden to the west toward a lake that was there then called Fatburen. The current roof design is from 1786. Some interiors have been maintained intact. The palace was purchased by Great Britain in 1723 to serve as its embassy in Sweden and has thus also been called the English Building. After that usage, it served as the poor house for Catherine's Parish until 1888, and was bought by the City of Stockholm in 1900. Today a large restaurant takes up the ground floor, an enclosed courtyard and (summers) also a sizable patio on the square, and there are offices and residential apartments in the rest of the building. Starting in the early 1970s, there have also been popular discotheques in an underground lounge.