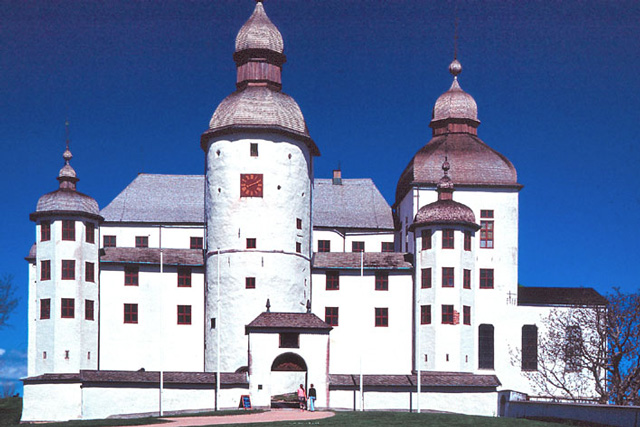 Location: Vastergotland, Sweden.
Built: 1298.
Condition: Intact.
Ownership / Access: Museum. National Property Board.
Notes: Lacko Castle (in Swedish: Lacko Slott ) is a medieval castle in Sweden. Lacko Castle is best known as Magnus de la Gardie's magnificent castle on the shores of Vanern, the largest lake in Sweden. Brynolf Algotsson, Bishop of Skara, laid the foundations for a fortified castle in 1298 originally as a fort that consisted of two or three houses surrounded by a wall. After a fire during the 1470s, the fort was expanded by bishop Brynolf Gerlachsson. After the reformation in 1527, King Gustav Vasa took possession. Field Marshal Jacob Pontusson De la Gardie was granted the property in 1615. Field Marshal de la Gardie embarked on an extensive building spree, including the third floor of the keep. The portal to the main courtyard was added during his period, as were the frescos depicting people and winding plants found in niches, stairwells and the rooms on the third floor. In 1654, Count Magnus Gabriel De la Gardie initiated immense construction projects at Lacko. A fourth floor was built in the main building and a number of artists were hired to decorate the walls and ceilings of the castle. Lacko Castle is a national monument and has been managed by the National Property Board since 1993. The National Property Board (Swedish: Statens fastighetsverk), the Foundation of Lacko Castle (Swedish: Stiftelsen Lacko Slott) and the National Museum of Fine Arts (Swedish: Nationalmuseum) work together to maintain and furnish the castle in the style of the Baroque period. Lacko Castle is located on the Kallandso island. The Castle is situated 25 kilometers north of Lidkoping in Vastergotland. Lacko Castle Opera puts on an annual opera production in the castle's inner courtyard, with performances for about three weeks beginning in the middle of July.

How To Get To Lacko Castle (Map):