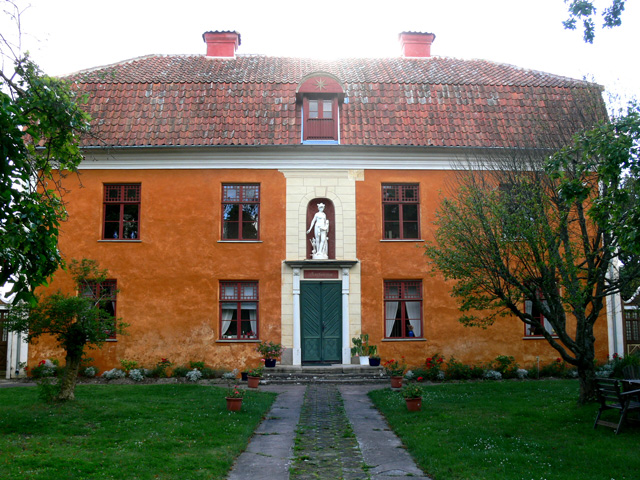 Location: Gotland, Sweden.
Built: 1805.
Condition: Intact.
Ownership / Access: Private residence.
Notes: Katthamra is a mansion on the Swedish island Gotland. Apart from the main building, several annexes and a garden belong to the estate. The main building has undergone several renovations but is a fine example of 1800s upper-class accommodation, with magnificent murals. The estate has recently undergone a major renovation. Six buildings have new roofs and three have been prepared for rental. Katthamra is an unusual example of a mansion on Gotland, where such buildings are uncommon. The estate dates from the Middle Ages. During the 18th and 19th centuries the owners of the estate earned a lot of money from limestone extraction. Among the owners of the house can be mentioned Nils Ihre, ancestor of Johan Ihre, the brothers Axel Haig (Swedish: Axel Herman Hagg), architect and artist (responsible for the renovation of Dalhem Church) and Jacob Hagg, painter of marine subjects, as well as Jacob Dugge, a reputedly ruthless businessman who enlarged the house to its present shape. The main building dates largely from the 18th century but was originally much smaller. The presently visible main building was enlarged in 1805 into the presently visible Neoclassical building. It is a two-storey house with a hip roof. Above the main entrance there is a statue of Diana. The house has some profusely painted interiors, made by artist Jonas Torssen.

How To Get To Katthamra Mansion (Map):