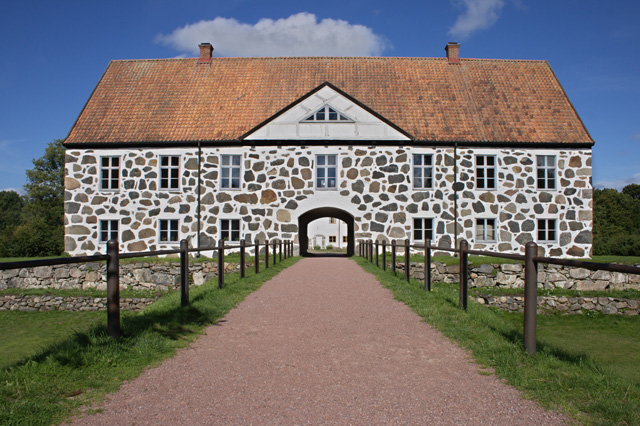 Location: Hassleholm Municipality, Scania, Sweden.
Built: 12th century.
Condition: Intact.
Ownership / Access: National Property Board of Sweden.
Notes: Hovdala Castle (Swedish: Hovdala slott) is a castle in Hassleholm Municipality, Scania, in southern Sweden. Its oldest parts date from the early 16th century.Hovdala is mentioned for the first time in 1130, but the presently visible castle complex began to be constructed during the early 16th century. The date 1511 can be read on one of the facades.During this time, Scania was a part of Denmark. The squire Magnus Rabek is mentioned in written sources as having owned the estate sometime before the Black Death. During the early 15th century, the estate belonged to a squire named Klement Skaldra. At the end of the century, the estate passed to the Laxmand family, who erected the oldest of the presently visible buildings. Through marriage it later passed to the Grubbe family. During the ownership of Sigvard Grubbe, an educated man who stood close to the king, Christian IV of Denmark, and who had studied in Wittenberg and Basel, the castle was besieged twice by Swedish troops during the Kalmar War. The castle withstood the sieges. After the death of Sigvard Grubbe, the castle passed between different owners until it became the property of Jens Mikkelsen, an officer in the Danish army, in 1651. After the conquest of Scania by Sweden in 1658, he changed his allegiance and instead joined the Swedish army. When the two countries again were involved in fighting during the Scanian War, the castle was assaulted, pillaged and burnt by pro-Danish guerilla fighters on 7 August 1678. Mikkelsen however survived the ordeal and was later ennobled by the Swedish king, and took the name Ehrenborg. The castle thenceforth stayed in the Ehrenborg family until 1944, when it was expropriated by the Swedish state. The last owners were however allowed to keep living in the castle and did not move out until 1981. From 1944, the former land of the estate was used as a military training field. Today the land belongs to Hassleholm municipality. A renovation of the castle was initiated in 1993. In 2004, renovation project was awarded the Europa Nostra award for "sensitive and intelligent restoration work.".

How To Get To Hovdala Castle (Map):