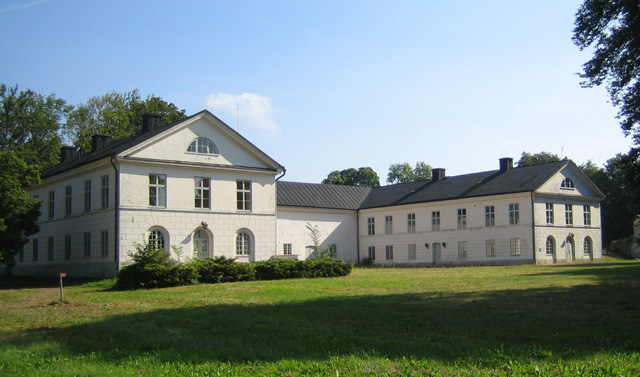 Location: Klippan Municipality,Scania,Sweden.
Built: 1144.
Condition: Intact.
Ownership / Access: Hotel.
Notes: Herrevad Abbey (Swedish: Herrevadskloster, Danish: Herrevads Kloster) was a Cistercian monastery near Ljungbyhed in Klippan Municipality, Scania, in the south of present-day Sweden, but formerly in Denmark until 1658. It is now a country house known as Herrevad Castle (Swedish: Herrevads slott, Danish: Herrevads Slot).Herrevad Abbey was founded from Citeaux Abbey in 1144 as Denmark's first Cistercian monastery with the support of Archbishop Eskil of Lund. Legend has it that Eskil fell ill while he was a student at Hildesheim University in Germany and was told he was near death. The Virgin Mary appeared to him in a dream and he promised her that if he was spared he would establish five monasteries from different orders. Eskil went on to become the provost of the chapter at Lund Cathedral, the Bishop of Roskilde, and succeeded his uncle, Asser Svendsen, as Archbishop of Lund, and from these important offices was able to fulfil his promise. Some Danish Benedictine monasteries had become unruly during his tenure, and the Cistercians were seen as reformers who would bring existing religious houses back to the original rigour of the Rule of St. Benedict. The original name, Herivad, meant the "army ford", referring to a ford over the Ronne River. After the construction of the abbey it became known as Herrevad, or "the Lord's ford", most likely because of the fee payable to the abbey for using the ford, and later the bridge, for commerce. Eskil wrote to Bernard of Clairvaux requesting twelve Cistercian monks from Citeaux Abbey under the leadership of Robert, the first abbot of Herrevad, to come to Denmark to establish a new monastery. Later an additional nine lay brothers were also despatched to instruct the Danes in the crafts and agricultural practices associated with the Cistercian Order. Archbishop Eskil gave the land for the site of the abbey and paid for its construction out of his own pocket. It was built near the village of Lyngbyhed, now Ljungbyhed, on the above-mentioned ford, which was of importance because of its position on the main road between Sweden and Denmark, and the resulting access to markets in both. The abbey was consecrated in 1150, though it was far from complete; the original dedication was probably to the Blessed Virgin Mary (Danish: Vor Frue Kloster). The church was begun in 1158 and built in the Romanesque style out of sandstone. Construction extended over several decades and for reasons of expense was continued in brick. The original monastery complex was severely damaged by a fire in 1291. The original sandstone was ruined by the heat of the fire, and so a new and larger Brick Gothic church was begun, second in size only to Lund Cathedral itself. It was 53 meters long, with two naves, one 19 meters wide and the other 28 meters wide. The abbey precinct consisted of the large church and three ranges which served as a dormitory, a refectory and cellars, a range for the housing of the lay brothers who did the farm work and administered to the abbey's temporal affairs, and a small library and scriptorium where religious texts were copied. Though there is some dispute, some scholars believe the Codex Runicus, a medieval attempt to use runes for writing the Law of Skane (Danish: Skanske Lov), was produced there. Herrevad Abbey over time became one of the largest and wealthiest monastic houses in Denmark, and certainly in Skane, then part of Denmark. At its height, the abbey owned more than 400 income-producing properties. It enjoyed the support of the nobility and Denmark's royal family for generations. Herrevad established three daughter houses in Denmark - Holme Abbey, Tvis Abbey and Logum Abbey - as well as several in Sweden.Herrevad was put at the disposal of the Northern Skane Cavalry Regiment in 1691 after the demolition of the monastery complex. By 1727 a new building for the regimental headquarters had been raised from building materials left over from the demolition of the abbey. It later became a residence for the commander, but retained the name Herrevad Abbey. In 1745 the residence was expanded and nicknamed "Herrevad Castle" (Danish: Herrevad Slot) by the soldiers. Two wings were added in 1816-1819 in the Empire style, and the name Herrevad Castle formally adopted. The buildings were used by various military units until 1994 when Herrevad Castle passed into private ownership. It is currently undergoing restoration. In the 1980s an excavation located the foundations of the choir and parts of the nave, which may still be seen.