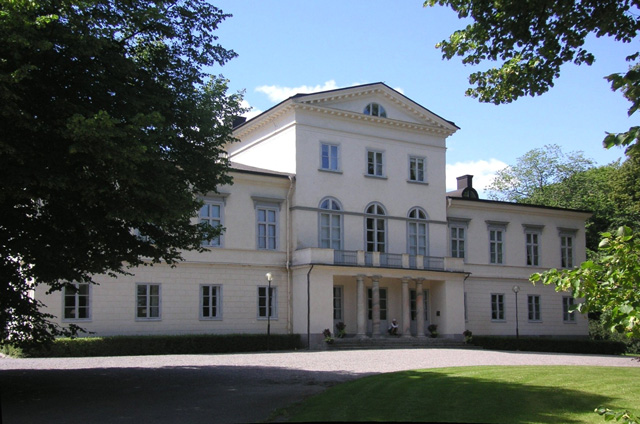 Location: Metropolitan Stockholm,Sweden.
Built: 1805.
Condition: Intact.
Ownership / Access: Private residence.
Notes: Haga Palace (Swedish: Haga slott), formerly known as the Queen's Pavilion (Swedish: Drottningens paviljong), is located in the Haga Park, Solna Municipality in Metropolitan Stockholm, Sweden. The palace, built in 1802 - 1805, was modelled after ballet-master Gallodiers Italian villa in Drottningholm by architect Carl Christoffer Gjorwell on appointment by King Gustaf IV Adolf for the royal children. It has been the home or summerhouse for several members of the Swedish royal family - most notably it was the birthplace of the present King - until 1966 when King Gustaf VI Adolf transferred its disposal to the government and it was turned into a guesthouse for distinguished foreign official visitors. In 2009, it was announced by Prime Minister Fredrik Reinfeldt that the rights of disposal to the palace will be transferred back to the royal court to be used by Victoria, Crown Princess of Sweden, and her husband, Prince Daniel, Duke of Vastergotland, as a wedding gift in 2010. They moved into Haga Palace after their wedding on 19 June.On April 23, 2009, Prime Minister Reinfeldt announced that the disposal rights to Haga Palace will be transferred back to the Royal Court as a wedding gift from the government in light of Crown Princess Victoria's approved marriage to Daniel Westling in June 2010. The couple moved in on November 15 2010.

How To Get To Haga Palace (Map):