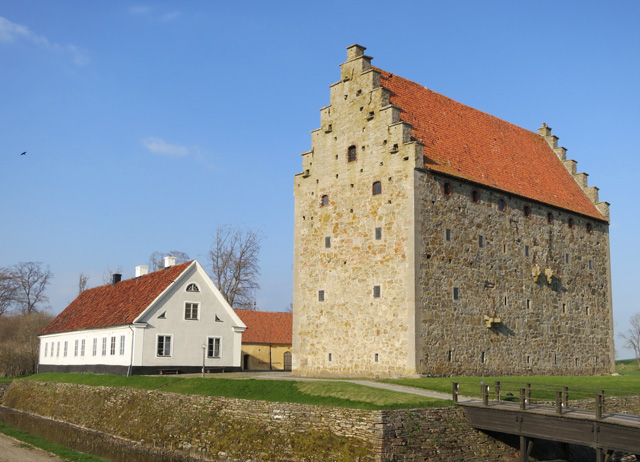 Location: Simrishamn Municipality, Scania, in southern Sweden.
Built: 1499.
Condition: Intact.
Ownership / Access: Museum. Swedish National Heritage Board.
Opening Times: Check their website for more info.
Price of Admission: Check their website for more info.
Notes: Glimmingehus, located in Simrishamn Municipality, Scania, in southern Sweden, is the best preserved medieval stronghold in Scandinavia. It was built 1499-1506, during an era when Scania formed a vital part of Denmark, and contains many defensive arrangements of the era, such as parapets, false doors and dead-end corridors, 'murder-holes' for pouring boiling pitch over the attackers, moats, drawbridges and various other forms of death traps to surprise trespassers and protect the nobles against peasant uprisings. The lower part of the castle's stone walls are 2.4 meters (94 inches) thick and the upper part 1.8 meters (71 inches). Construction was started in 1499 by the Danish knight Jens Holgersen Ulfstand and stone-cutter-mason and architect Adam van Duren, a North German master who also worked on Lund Cathedral. Construction was completed in 1506. On site there is a museum, medieval kitchen, shop and restaurant and coffee house. During summer time there are several guided tours daily. In local folklore, the castle is described as haunted by multiple ghosts and the tradition of story telling inspired by the castle is continued in the summer events at the castle called "Strange stories and terrifying tales".

How To Get To Glimmingehus (Map):