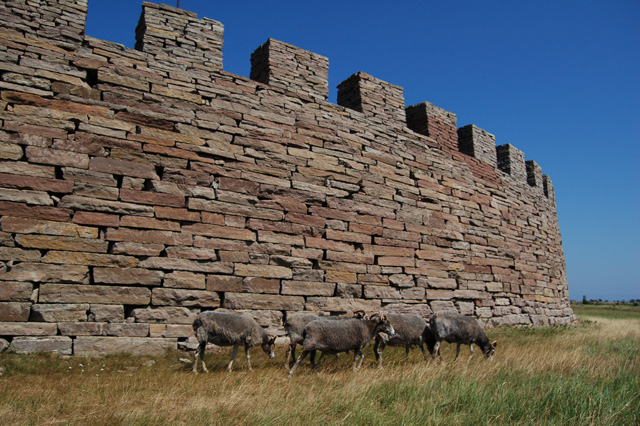 Location: Oland, Sweden.
Built: 5th century.
Condition: Ruin.
Ownership / Access: Museum.
Notes: Eketorp is an Iron Age fort in southeastern Oland, Sweden, which was extensively reconstructed and enlarged in the Middle Ages. Throughout the ages the fortification has served a variety of somewhat differing uses: from defensive ringfort, to medieval safe haven and thence a cavalry garrison. In the 20th century it was further reconstructed to become a heavily visited tourist site and a location for re-enactment of medieval battles. Eketorp is the only one of the 19 known prehistoric fortifications on Oland that has been completely excavated, yielding a total of over 24,000 individual artifacts. The entirety of southern Oland has been designated as a World Heritage Site by UNESCO. The Eketorp fortification is often referred to as Eketorp Castle. Presently the fort is used as a tourist site for visitors to Oland to experience a medieval fortification for this region. A museum within the castle walls displays a few of the large number of artefacts retrieved by the National Heritage Board during the major decade long excavation ending in 1974. Inside the fort visitors are greeted by actors in medieval costumes who assume the roles of period artisans and merchants who might have lived there nine centuries earlier. There are also re-enactment scenes of skirmishes and other dramatic events of daily life from the Middle Ages. Eketorp lies a few kilometers west of route 136. There is an ample unpaved parking area situated approximately two kilometers west of the paved Oland perimeter highway. There is also a gift shop on site. During peak summer visitation, there are guided tours available. Visitors are assessed an admission charge.

How To Get To Eketorp (Map):