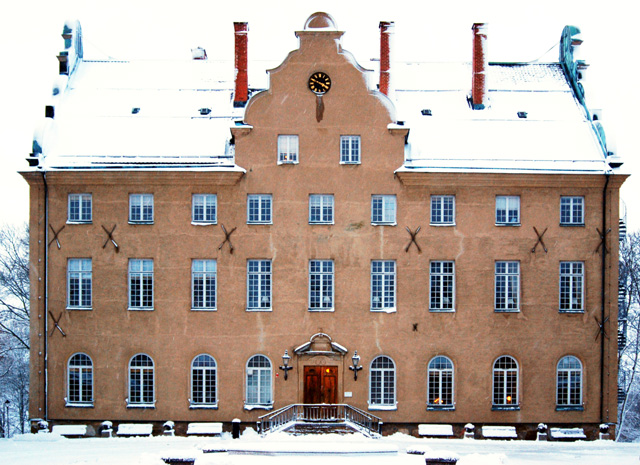 Location: Stockholm, Sweden.
Built: 15th century.
Condition: Intact.
Ownership / Access: Serves as the community center in Danderyd Municipality.
Notes: Djursholm Castle (Djursholms slott) is a castle in Sweden. Djursholm is located in Danderyd Municipality, within Stockholm urban area. The castle includes building components from the late Middle Ages. It was the main building on the estate Djursholm, which was owned by the House of Baner from 1508-1813. Nils Eskilsson (Baner), who was lord of Djursholm 1508 to 1520, built a new palace at the place where Djursholm Castle remains. Djursholm Castle was the residence of both Privy Councillour Gustaf Baner and his son, Field Marshal Johan Baner. Svante Gustavsson Baner gave the castle its present appearance in the 17th century. By the mid 17th century the castle was its present size. The main hall was fitted at this time, with plaster ceilings, stairs castle was of limestone and oak, and walls hung with art wallpaper full of gilt leather (leather wallpaper) and other materials. In 1891, Djursholms secondary school (Djursholms samskola) was started in the building. Until 1910, Djursholms secondary school operated on the premises. The first inspector of Djursholms samskolas was author Viktor Rydberg. Among the earliest teachers were Erik Axel Karlfeldt and Alice Tegner. Writer Elsa Beskow was an art teacher and her husband, theologian Natanael Beskow served as the headmaster of the school from 1897 to 1909. In the 1890s, the castle was restored in Baroque style. Facade design was simplified by a new restoration from 1959 to 1961. A new entrance with modern suitability to the castle was built on the north side in 2003. Today it serves as the community center (kommunhus) in Danderyd Municipality.