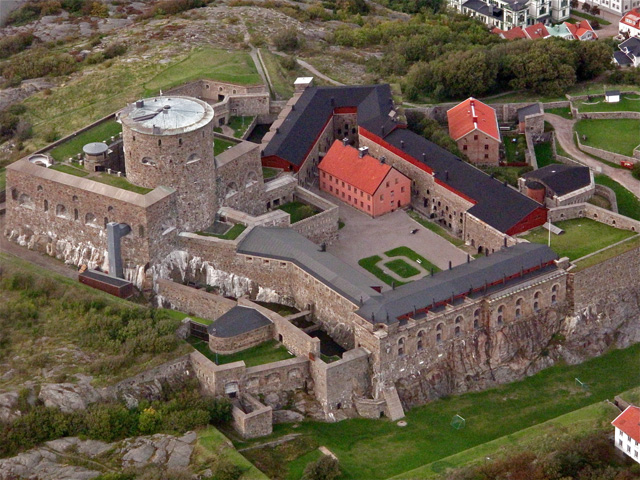 Location: Marstrand, Sweden.
Built: 1658-1860.
Condition: Intact.
Ownership / Access: Museum.
Opening Times: Check their website for more info.
Price of Admission: Check their website for more info.
Notes: Carlsten (Swedish: Karlstens fastning) is a stone fortress located at Marstrand, on the western coast of Sweden. The fortress was built on the orders of King Carl X of Sweden following the Treaty of Roskilde, 1658 to protect the newly acquired province of Bohuslan from hostile attacks. The site of Marstrand was chosen because of its location and its access to an ice free port. Initially a square stone tower was constructed, but by 1680 it was reconstructed and replaced by a round shaped tower. Successive additions to the fortress were carried out, by the inmates sentenced to hard labor, until 1860 when it was reported finished. Carlsten was exclusively a prison for men: Metta Fock in 1806-1809 was the only female prisoner to have been kept here. The fortress was decommissioned as a permanent defense installation in 1882, but remained in military use until the early 1990s. The fortress was attacked and sieged twice falling into enemy hands. In 1677 it was conquered by Ulrik Frederik Gyldenlove, the Danish military commander in Norway during the Battle of Marstrand and in 1719 by the Norwegian Vice-Admiral Tordenskjold. At both occasions the fortress was returned to Swedish control through negotiations and treaties.