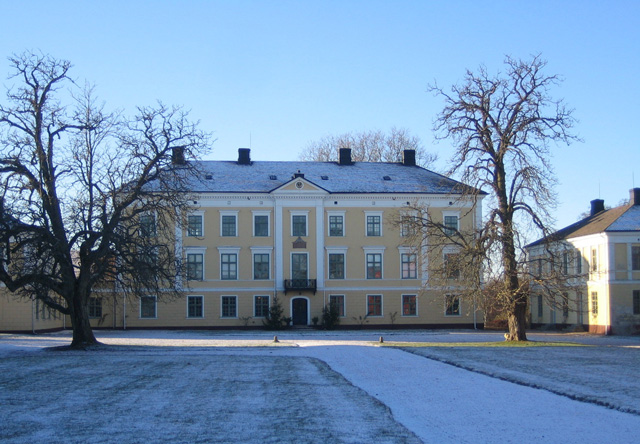 Location: Svedala, Scania, in southern Sweden.
Built: 13th century.
Condition: Intact.
Ownership / Access: Private residence.
Notes: Borringekloster Castle (Swedish: Borringeklosters slott), formerly Borringe Priory (Swedish: Borringekloster), is a castle built in 1763 on the ruins of a medieval Benedictine priory in Svedala, Scania, in southern Sweden.The priory was founded about 1150 under Eskil, Archbishop of Lund, for Benedictine monks. However, by 1231 Borringe Priory is mentioned in Liber Census Daniae as a nunnery located on the island of Byrdingo in Borringe Lake, on land which Valdemar II of Denmark had once set aside for hunting. The church was dedicated to the Virgin Mary, and the nunnery was later also known as St. Mary's Priory. The building complex began small, but with the income from donations of money and rent properties, the priory was able to expand into three ranges attached to the church forming a four-sided enclosure to separate the nuns from the world. The nuns slept in the dormitory, another range contained a refectory and cellars, and a third was used for laywomen who lived in the priory, often the unmarried daughters or sisters of noble families who lived a religious life but were not strictly bound by the vows the nuns took. Occasionally, a widow exchanged her worldly goods for the opportunity to live out her life at the priory which provided room and board until her death. Housing these women was one source of income for the priory. Other income came from rent properties such as farms. While not specifically mentioned another common source of income was part of the tithes from nearby churches given by the Archdiocese of Lund for the maintenance of the nuns. Lastly the priory might also receive royal support in the form of rights to fishing grounds in Borringe Lake or landing rights for commerce over streams or rivers. The nunnery was rebuilt over several decades during the 14th century in the Gothic style out of brick. Religious leadership and the internal running of the community was the responsibility of the prioress, while a prior, often a local noble who paid for the privilege, was responsible for representing the nuns in worldly affairs. The kingdom of Denmark became Lutheran in 1536 under Christian III, a staunch Protestant. All religious houses and their attendant income properties reverted to the crown for disposition. Borringe Priory was secularized the same year and became an estate which the king gave to the Brahe family with the condition that the former nuns were to be cared for, essentially a home for honourable and noble women. The entire archive was lost. The church was converted to a parish church for the village of Borringe. In 1551, the former priory estate passed to the nobleman Knud Gedde, and was apparently used as living quarters by tenant farmers. In 1582 it passed to Lady Gorvel Sparre who ordered the conventual church demolished, and the materials to be used for the construction of a new parish church closer to the town, which was completed by 1587. The grave of Lady Else Brade from the former priory church was moved under the floor of the new parish church. Usable parts of the former conventual buildings were converted into a large manor house.

How To Get To Borringe Priory (Map):