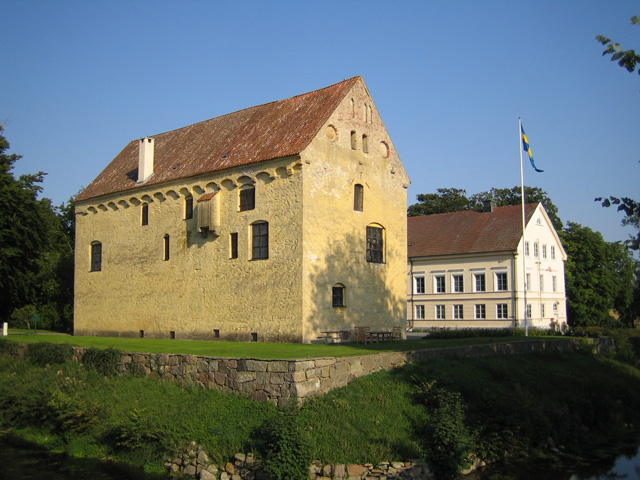 Location: Tomelilla Municipality, Scania, in southern Sweden.
Built: 15th century.
Condition: Intact.
Ownership / Access: School.
Notes: Bollerup (Swedish: Bollerup borg) is a castle in Tomelilla Municipality, Scania, in southern Sweden. The castle is mentioned in written sources for the first time in the middle of the 13th century, but is apparently older. The rectangular main stone building is probably the product of the merging of several earlier structures, the most important very possibly a tall keep or tower house. During the Middle Ages the castle was an important estate in the hands of influential noble families, and the castle complex was probably extended with a moat and other defensive works during this time. The castle received its present-day form c. 1460. Bollerup Church located adjacent to the castle is further proof of the early importance of the site. During an uprising in 1525, the castle was burnt. It was later restored, but a period of decline had inevitably begun for the castle, which is mentioned as being without roof and proper floors a hundred and fifty years later. Later it was converted into a granary and used as such until the mid-20th century, when a restoration was carried out. Today the castle is part of an upper secondary school specialised in natural resource uses.

How To Get To Bollerup (Map):