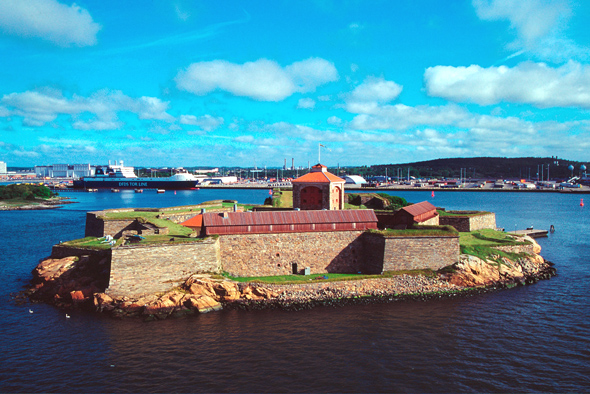 Location: Gothenburg, Sweden.
Built: 1650.
Condition: Intact.
Ownership / Access: Museum.
Notes: Alvsborg, also Elfsborg Fortress, is a large sea fortress in Rivo fjord, within modern Gothenburg, Sweden. Situated at the mouth of the Gota River, it served to protect medieval Sweden's only access to the North Sea and Atlantic Ocean and the nearby settlement of today's Gothenburg and its four predecessors. The original Old Alvsborg Fortress was located on the mainland, on the southern shore of the estuary, above modern Klippan. Only few ruins are visible today in the vicinity of the Carnegie-pier. The old fortress was dismantled and relocated to one of the islands in the estuary, in the 17th century. This New Alvsborg Fortress (Swedish: Nya Elfsborg) is still maintained. In 1643, a settlement in New Sweden, North America, was named Fort Nya Elfsborg ("Fort New Alvsborg"), after the Swedish fortress. This settlement was abandoned in 1655. Gothenburg was the main centre for Swedes emigrating to America, and the fortress would have been one of the last sights the emigrants saw on leaving the country.