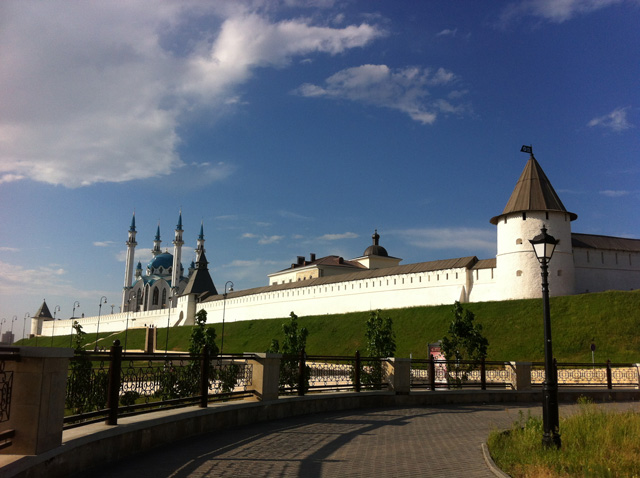 Location: Kazan, Russia.
Built: 1672.
Condition: Intact.
Ownership / Access: --
Notes: The Kazan Kremlin is the chief historic citadel of Tatarstan, situated in the city of Kazan. It was built at the behest of Ivan the Terrible on the ruins of the former castle of Kazan khans. It was declared a World Heritage Site in 2000. The opening of the biggest mosque in Europe, the Qolsarif Mosque, was held in Kazan on June 24, 2005. Roughly 17,000 people gathered for the celebration. Delegations from forty countries attended the event. The facility was reconstructed on the site where presumably Kazan Khanate's principal mosque had been standing before 1552. Speaking at the ceremony, Tatarstan President Mintimer Shaeymiev said "the Qolsarif mosque is a new symbol of Kazan and Tatarstan... a bridge connecting... our past and future." The decree on restoring the Qolsarif mosque (1995) also ordered the restoration of the Annunciation Cathedral in the Kazan Kremlin which had been taken away from Orthodox Christians after the Russian Revolution. On July 21, 2005, the feast day of the holy icon "Theotokos of Kazan", in the presence of the crowd of 10,000 pilgrims, Patriarch Alexius II and Mintimer Shaeymiev placed at the newly restored Annunciation Cathedral the holiest copy of the long-lost icon, which had been returned to Russia by Pope John Paul II shortly before his death. In 2005 the first stage of the Kazan Metro also included a station Kreml whose exits are right next to the Kremlin.

How To Get To Kazan Kremlin (Map):