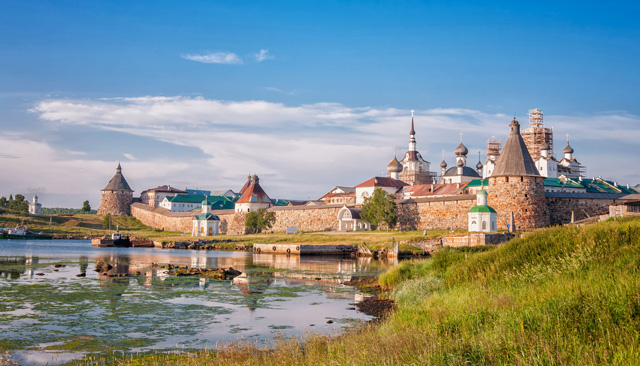 Location: Arkhangelsk Oblast, Russia.
Built: 1436-1834.
Condition: Intact.
Ownership / Access: Open to public.
Notes: The Solovetsky Monastery is a fortified monastery located on the Solovetsky Islands in the White Sea in northern Russia. It was one of the largest Christian citadels in northern Russia before it was converted into a Soviet prison and labor camp in 1926-39, and served as a prototype for the camps of the Gulag system. The monastery has experienced several major changes and military sieges. Its most important structures date from the 16th century, when Filip Kolychev was its hegumen (comparable to an abbot).A small brotherhood of monks has re-established activities in the monastery after the end of the communism, and it currently houses about ten monks. The monastery has also recently been extensively repaired, but remains under reconstruction. The Solovetsky Monastery is also an historical and architectural museum. It was one of the first Russian sites to have been inscribed in the UNESCO World Heritage List.

How To Get To Solovetsky Monastery (Map):