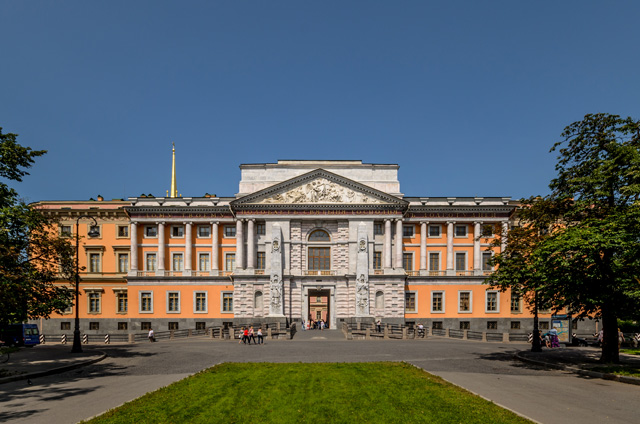 Location: Saint Petersburg, Russia.
Built: 1797-1801.
Condition: Intact.
Ownership / Access: --.
Notes: St. Michael's Castle, also called the Mikhailovsky Castle or the Engineers' Castle, is a former royal residence in the historic centre of Saint Petersburg, Russia. St. Michael's Castle was built as a residence for Emperor Paul I by architects Vincenzo Brenna and Vasili Bazhenov in 1797-1801. The castle looks different from each side, as the architects used motifs of various architectural styles such as French Classicism, Italian Renaissance and Gothic. St. Michael's Castle was built to the south of the Summer Garden and replaced the small wooden palace of Empress Elizabeth Petrovna. Afraid of intrigues and assassination plots, Emperor Paul I disliked the Winter Palace where he never felt safe. Due to his personal fascination with medieval knights and his constant fear of assassination, the new royal residence was built like a castle around a small octagonal courtyard. The building with rounded corners was surrounded by the waters of the Moika River, the Fontanka River and two specially dug canals (the Church Canal and the Sunday Canal), transforming the castle area into an artificial island which could only be reached by drawbridges. Construction began on 26 February (N.S. 9 March), 1797 and the castle was solemnly consecrated on 8 November 1800, i.e. on St. Michael's Day in the Eastern Orthodox calendar, though finishing work on the interior continued until March 1801. In 1800, the bronze equestrian Monument to Peter the Great was set up in front of the castle. This statue had been designed during Peter the Great's lifetime and later, with the casting being completed in 1747 by the architect Bartolomeo Rastrelli. By order of Paul I, the inscription "From Great Grandson to Great Grandfather" was made on the pedestal that is decorated with bas-reliefs depicting scenes of two Russian victories over Sweden during the Great Northern War. Ironically, Paul I was assassinated only 40 nights after he moved into his newly built castle. He was murdered on 12 March 1801, in his own bedroom, by a group of dismissed officers headed by General Bennigsen. The conspirators forced him to a table, and tried to compel him to sign his abdication. Paul offered some resistance, and one of the assassins struck him with a sword, and he was then strangled and trampled to death. He was succeeded by his son, Emperor Alexander I, who was actually in the palace at the time and was informed of his accession by General Nicholas Zubov, one of the assassins. After Paul's death, the imperial family returned to the Winter Palace; St. Michael's Castle was abandoned and in 1823 was given to the army's Main Engineering School (later to become the Nikolayevskaya Engineering Academy and now the Military Engineering-Technical University). From then on, the building was known as the Engineers' Castle. Between 1838 and 1843, the Russian writer Fyodor Dostoyevsky studied as a cadet at the Main Engineering School. In the early 1990s, St. Michael's Castle became a branch of the Russian Museum and now houses its Portrait Gallery, featuring official portraits of the Russian Emperors and Empresses and various dignitaries and celebrities from the late 17th to the early 20th century.

How To Get To St. Michael's Castle (Map):