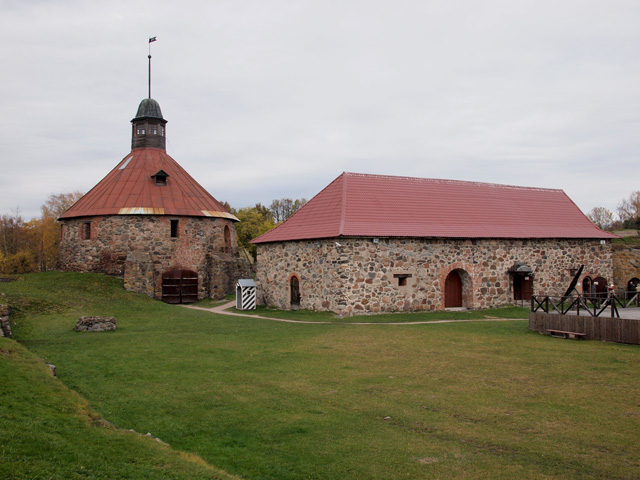 Location: Priozersk, Russia.
Built: 1310
Condition: Intact.
Ownership / Access: --
Notes: Korela Fortress, at the town of Priozersk, was founded by the Novgorodians to protect North Rus from Sweden.. It was first mentioned in a Novgorodian chronicle of 1143 as Korela, and archaeological digs have revealed a layer belonging to the 12th century. Swedish chronicles first reported of the settlement of Keksholm in 1294. Until the 16th century, the fortress belonged to the Novgorod Republic, followed by Muscovy. Novgorodians built the current stone bastions and towers in 1364 after a fire had destroyed the original wooden fortress in 1360. During a Swedish-Novgorodian war in 1314, a small Karelian force re-captured their fortress from the representatives of Novgorod. They invited Swedes to keep it against Novgorod; however, the Novgorodians reconquered the fortress. The fortress was confirmed as belonging to Novgorod in the treaty of Noteborg of 1323.In 1917 Finland declared independence and Kakisalmi county became a part of the Karelian province. It was finally ceded to the Soviet Union in 1944.