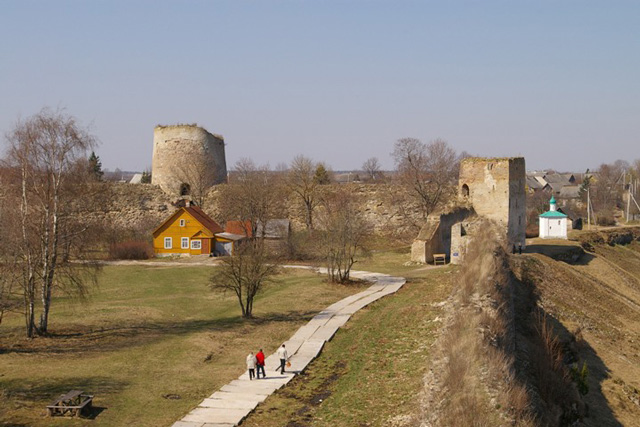 Location: Pechorsky District of Pskov Oblast, Russia.
Built: 14th century,
Condition: ruin.
Ownership / Access: --.
Notes: According to the Russian Primary Chronicle, the town was the seat of Rurik's brother Truvor from 862-864. Although his burial mound is still shown to occasional tourists, archaeological excavations of long barrows abounding in the vicinity did not reveal the presence of the Varangian settlement at the site, indicating that Izborsk was an important centre of the early Krivichs. The next mention of the town in Slavonic chronicles dates back to 1233, when the place was captured by the Livonian Brothers of the Sword. Pskov moved the fortress to a more convenient site in 1302. The most ancient extant structure is the Tower Lukovka (literally, "Onion Tower"), constructed in 1330. At that time it was the only stone building west of Pskov and adjoined a wooden wall. After seven other stone towers and the new stone wall were completed, Lukovka became a watch-tower. The Nativity church within the fortress was built in the 16th century. Near the fortress is a museum of stone crosses.