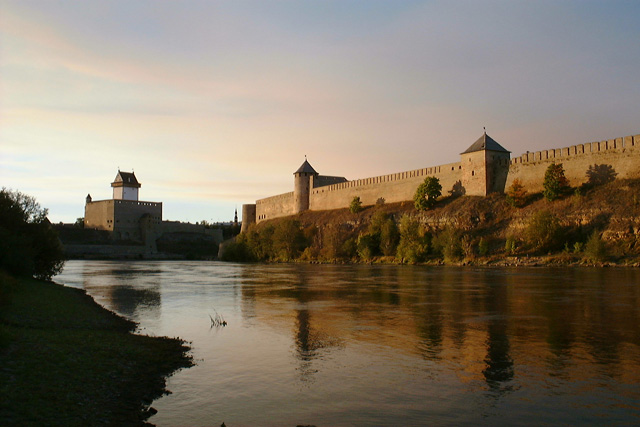 Location: Leningrad Oblast, Russia.
Built: 1492.
Condition: Intact.
Ownership / Access: --
Notes: The fortress was established in 1492 during the reign of Ivan III of Moscow and was named after him. Between 1581-1590 and between 1612-1704, it was controlled by Sweden. Ivangorod was granted town privileges and administered as a Russian township under the Crown of Sweden (who conquered it in 1612 from boyar Teuvo Aminev) until 1649, when its burghers were ordered to remove to a Narva suburb. In 1617, the Treaty of Stolbovo was signed between Russia and Sweden, which placed the area under the Swedish sovereignty. Russia reconquered it during the Great Northern War in 1704. Despite other changes in territory and sovereignty, Ivangorod was considered an administrative part of the town of Narva from 1649 until 1945. In 1780, Ivangorod, together with Narva, was included into Narvsky Uyezd of St. Petersburg Governorate. In 1796, Narvsky Uyezd was abolished and merged into Yamburgsky Uyezd. In the aftermath of the Estonian War of Independence, the newly independent Republic of Estonia established control over the whole of Narva, including Ivangorod, in January 1919, a move which was recognized by Soviet Russia in the 1920 Treaty of Tartu. In January 1945, the Narva River was defined as the border between the Estonian SSR and Russian SFSR, and as a result administration of Ivangorod was transferred from Narva to Kingiseppsky District of Leningrad Oblast. Having grown in population, Ivangorod was granted town status on October 28, 1954. After the restoration of Estonian independence in 1991, there have been some disputes about the Estonian-Russian border in the Narva area, as the new constitution of Estonia (adopted in 1992) recognizes the 1920 Treaty of Tartu border to be currently legal. The Russian Federation, however, considers Estonia to be a successor of the Estonian SSR and recognizes the 1945 border between two former national republics. Officially, Estonia has no territorial claims in the area, which is also reflected in the new Estonian-Russian border treaty, according to which Ivangorod remains a part of Russia. Although the treaty was signed in 2005 by the foreign ministers of Estonia and Russia, due to continuing political tensions it has not been ratified.

How To Get To Ivangorod fortress (Map):