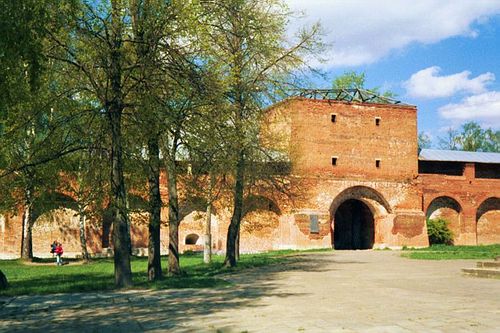 Location: Moscow Oblast, Russia.
Built: 1528-1531.
Condition: Intact.
Ownership / Access: --
Notes: In the Grand Duchy of Moscow, Zaraysk was one of the fortresses forming a part of the Great Abatis Border, a fortified line of felled trees, barricades, fortresses, ditches, which were built by Russians as a protection against the hordes of the Crimean and Kazan Tatars. In 1531, a stone kremlin was built in place of the former wooden citadel. The Tatars failed to take the fortress during their raids in 1533, 1541, and 1570. It was briefly captured by the Lisowczycy during the Time of Troubles.The brick-and-limestone kremlin in Zaraysk still stands and is kept in a rather good condition. The citadel is very small and has a rectangular shape, with only six towers, two of which are pierced by the gates.