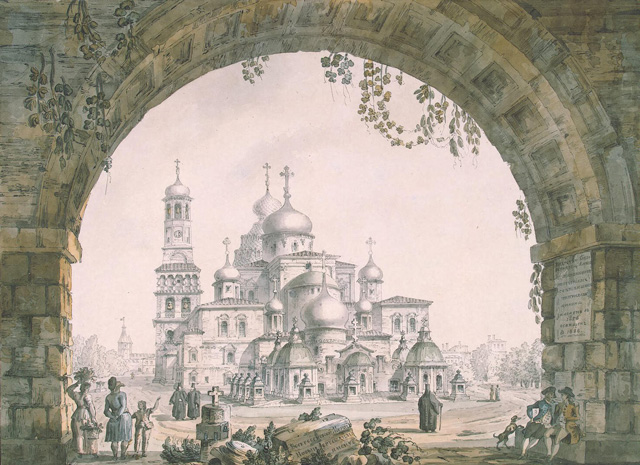 Location: Moscow Oblast, Russia.
Built: 1656-1697.
Condition: Intact.
Ownership / Access: Male monastery.
Notes: The New Jerusalem Monastery or Novoiyerusalimsky Monastery, also known as the Voskresensky (Resurrection) Monastery, is a male monastery, located in the town of Istra in Moscow Oblast, Russia. The New Jerusalem Monastery was founded in 1656 by Patriarch Nikon as a patriarchal residence on the outskirts of Moscow. The monastery took its name from the New Jerusalem. This site was chosen for its resemblance to the Holy Land. The River Istra represents the Jordan, and the buildings represent the 'sacral space' or holy places of Jerusalem. In his time, Patriarch Nikon recruited a number of monks of non-Russian origin to populate the monastery, as it was intended to represent the multinational Orthodoxy of the Heavenly Jerusalem. The architectural ensemble of the monastery includes the Resurrection Cathedral (1656-1685), identical to a cathedral of the same name in Jerusalem, Patriarch Nikon's residence (1658), stone wall with towers (1690-1694), Church of the Holy Trinity (1686-1698), and other buildings, all of them finished with majolica and stucco moulding. Architects P.I.Zaborsky, Yakov Bukhvostov, Bartolomeo Rastrelli, Matvei Kazakov, Karl Blank and others took part in the creation of this ensemble. In the 17th century, the New Jerusalem Monastery owned a large library, compiled by Nikon from manuscripts taken from other monasteries. By the time of the secularization of 1764, the monastery possessed some 13,000 peasants.In 1918, the New Jerusalem Monastery was closed down. In 1920, a museum of history and arts and another of regional studies were established on the premises of the monastery. In 1935, the Moscow Oblast Museum of Regional Studies was opened in one of the monastic buildings. In 1941, the German army ransacked the New Jerusalem Monastery. Before their retreat they blew up its unique great belfry; the towers were demolished; the vaults of the cathedral collapsed and buried its famous iconostasis, among other treasures . In 1959, the museum was re-opened to the public, although the bell-tower has never been rebuilt, while the interior of the cathedral is still bare. The New Jerusalem Monastery was re-established as a religious community only in the 1990s. In March 2009 Russian president Dmitry Medvedev signed a presidential decree on the restoration and renovation of the New Jerusalem Monastery. The federal government was instructed to subsidize the monastery restoration fund from the federal budget from 2009, with deputy prime minister in Putin's cabinet, Viktor Zubkov estimating it will cost about 13-20 billion Russian roubles.

How To Get To New Jerusalem Monastery (Map):