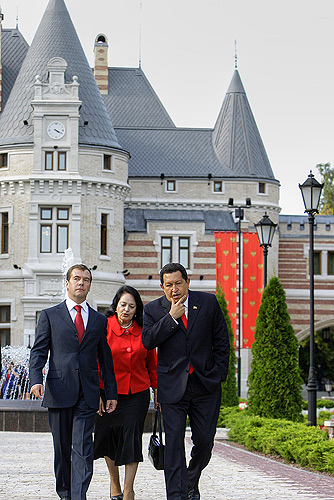 Location: Moscow Oblast, Russia.
Built: 1874-1885.
Condition: Intact.
Ownership / Access: --
Notes: Meyendorff Castle or Meiendorf Castle is a Chateauesque architectural extravaganza constructed at the turn of the 20th century in Barvikha near Moscow to Pyotr Boytsov's designs as a private residence of the Meyendorff family (a cadet line of the Baltic German noble house of Uexkull). After the outbreak of World War I the owners of the castle left Russia. After the October Revolution the castle was occupied by Vladimir Lenin and other Bolshevik leaders. In 1935 the grounds were declared a high-profile, exclusive sanatorium. Mikhail Bulgakov, Sergey Korolyov and Yuri Gagarin were among those who vacationed at Barvikha. There is also a World War II cemetery marked by Yevgeny Vuchetich's miniature copy of his Mamayev Monument. In the 21st century Barvikha Castle has been designated a country residence of the President of Russia. It was there that the Meyendorff Declaration of 2008 was signed by the leaders of Armenia and Azerbaijan.