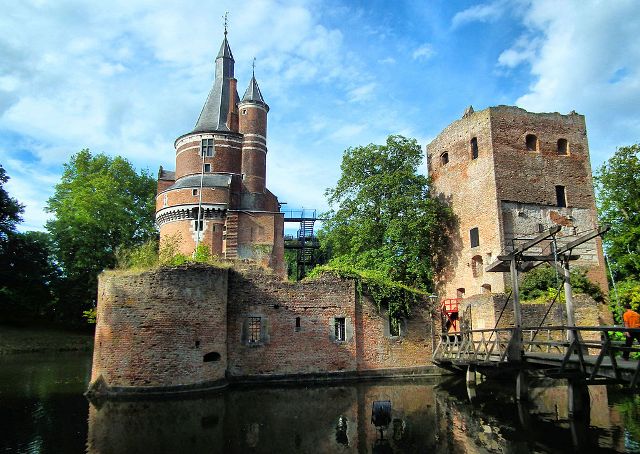 Location: Wijk bij Duurstede, Utrecht, Netherlands.
Built: 1270.
Condition: Ruin.
Ownership / Access: --
Notes: Duurstede Castle (Dutch: Kasteel Duurstede) is a medieval castle in Wijk bij Duurstede in the province of Utrecht in the Netherlands.The castle originated in the 13th century. Around 1270, Zweder I van Zuylen van Abcoude built a freestanding keep on a raised and moated site near the lost city Dorestad. Until the beginning of the 15th century Duurstede Castle was in possession by the Van Zuylen van Abcoude family, until they were forced to sell it to the bishops of Utrecht in 1449. Bishop David of Burgundy, who reigned from 1459 to 1496, completely rebuilt the castle. The old donjon was enclosed by new buildings. The still intact burgundian tower was also built around this time. His successors Frederick IV of Baden and Philip of Burgundy also used the castle as their residence, and Philip of Burgundy embellished the castle with renaissance features. Philip of Burgundy settled at Duurstede Castle when he became bishop of Utrecht in 1517. He was accompanied by his court painter Mabuse (Jan Gossaert), who helped to decorate the new palace of his master. At Philip's death, in 1524, Mabuse designed and erected his tomb in the church of Wijk bij Duurstede. After Philip's death, Charles V, Holy Roman Emperor confiscated all territorial possessions of the bishopric of Utrecht, including Duurstede Castle.

How To Get To Duurstede Castle (Map):