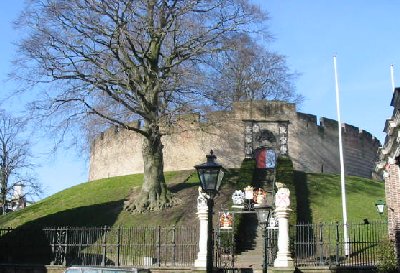 Location: Leiden, South Holland, Netherlands.
Built: 1100.
Condition: In good condition.
Ownership / Access: Public park.
Notes: The Burcht van Leiden (Dutch pronunciation: [ˈbɵrxt fɑn ˈlɛidə(n)]; Fort of Leiden) is an old shell keep in Leiden constructed in the 11th century. It is located at the spot where two tributaries of the Rhine come together, the Oude Rijn and the Nieuwe Rijn. The structure is on top of a motte, and is today a public park. In 1651 the city bought the premises to make it into a water tower for public use. A system of waterpipes leading to squares in the city is still intact.[2] In this period a new portal on the keep wall was designed in 1662 with heraldric symbols by Rombout Verhulst, denoting the leading families of the city.[4][5] There are two other gates to the Burcht, one at the base of the hill with wrought iron heraldric weapons, built in 1653, and one on the south side of the complex, which itself forms a gateway to the park. In this Southern gateway a poem in Latin was used for centuries to teach the rudiments of grammar to Leiden students. A memorial plaque was placed in 1999 with the modern translation in Dutch.

How To Get To Burcht van Leiden (Map):