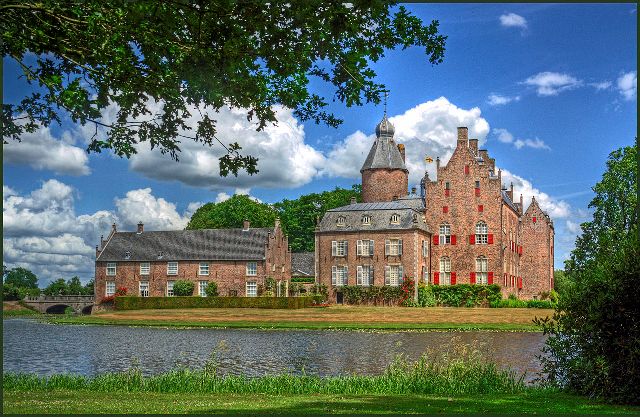 Location: Dalfsen, Overijssel, Netherlands.
Built: 12th century.
Condition: In good condition.
Ownership / Access: --
Notes: Rechteren Castle (Dutch: Kasteel Rechteren) is a Dutch castle situated on an island on side-branch of Overijsselse Vecht river, near the village of Dalfsen. It is the only castle in the province Overijssel from the Middle Ages that still exists. The castle has been renovated and extended several times throughout the centuries. In 1591, Prince Maurice of Orange requested the owners to dismantle all fortification elements, so that the Spanish troops would not be able to seize an important military stronghold. The surrounding ring wall was torn down, and the main moat was drained. In the 18th century, two wings were added to the main building. In 1896 the main building and the main tower were transformed in neogothic style. In the 1950s, all the neogothic elements were removed, and the 18th century style of the castle was restored. In 1908 and 1991, the owners of the castle allowed a photographer to take pictures of the interior. The vestibule contains many family portraits, and there is a white salon designed in rococo style. The dinner room is decorated with paintings by Herman ten Oever, depicting scenes from Greek mythology. The central hall contains portraits and arms of the Rechteren family.

How To Get To Rechteren Castle (Map):