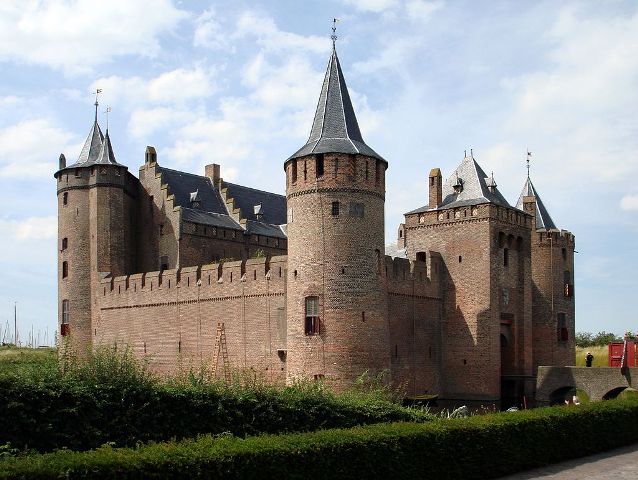 Location: Muiden, North Holland, Netherlands.
Built: 1370.
Condition: In good condition.
Ownership / Access: Currently a national museum.
Notes: Muiden Castle (Dutch: Muiderslot, Dutch pronunciation: [ˌmœydərˈslɔt]) is a castle in the Netherlands, located at the mouth of the Vecht river, some 15 kilometers southeast of Amsterdam, in Muiden, where it flows into what used to be the Zuiderzee. It's one of the better known castles in the Netherlands and has been featured in many television shows set in the Middle Ages. At the end of the 18th century, the castle was first used as a prison, then abandoned and became derelict. Further neglect caused it to be offered for sale in 1825, with the purpose of it being demolished. Only intervention by King William I prevented this. Another 70 years went by until enough money was gathered to restore the castle to its former glory. Muiden Castle is currently a national museum (Rijksmuseum). The insides of the castle, its rooms and kitchens, have been restored to look like they did in the 17th century and several of the rooms now house a good collection of arms and armour.

How To Get To Muiden Castle (Map):