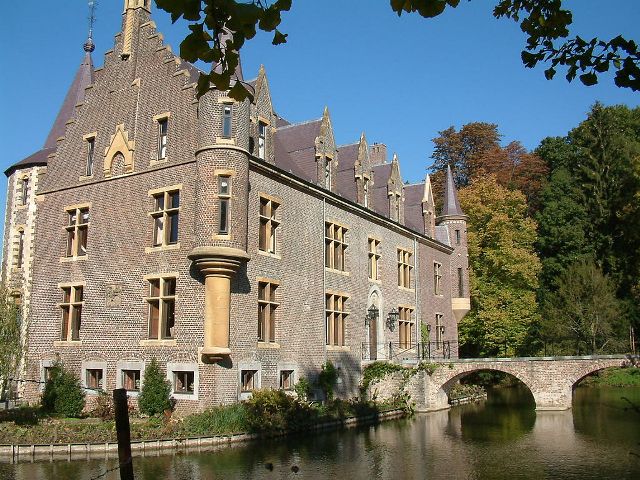 Location: Heerlen, Limburg, Netherlands.
Built: 15th century.
Condition: In good condition.
Ownership / Access: Van der Valk, now a hotel and restaurant.
Notes: Ter Worm or Terworm Castle (Dutch: Kasteel Terworm) is a castle located in the municipality of Heerlen, Limburg Province, Netherlands. The castle is part of the Terworm estate.The present building dates largely from the 17th century when the original 15th-century fortified building was converted into a house. It comprises two wings in a T-shaped floor plan surrounded by a moat. The main building is accessible at the front via a marl stone bridge dating from 1843 leading to the main entrance. Between the two wings is a corner tower, which is the oldest part of the castle dating back to the 15th century. Originally round, the tower was converted to an octagonal in the 17th century . The west wing can be dated to 1716, while the south wing has a keystone with the year 1718. The castle garden is a reconstruction based on a French rococo garden laid out by Count Vincent van der Heyden-Belderbusch in 1787 with roses, lavender and boxwood. The garden is a favourite wedding location and admission is free.

How To Get To Ter Worm Castle (Map):