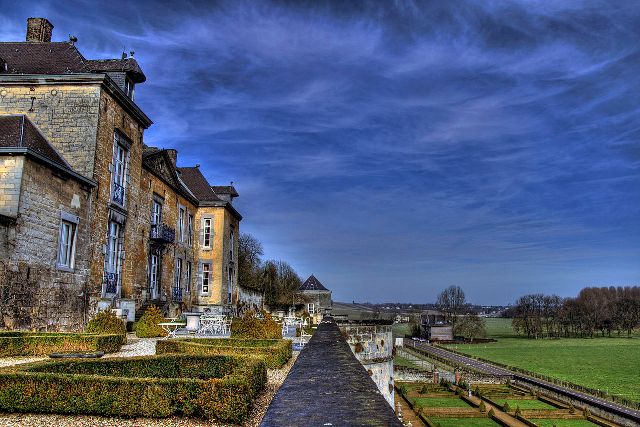 Location: Maastricht, Limburg, Netherlands.
Built: --
Condition: In good condition.
Ownership / Access: Now a fine dining restaurant.
Notes: Château Neercanne (also known as Agimont or kasteel Neercanne) is a restaurant located in Maastricht in the Netherlands. It is a fine dining restaurant that is awarded one or two Michelin stars in the periods 1957-1982 and 1986–present. In 2013, GaultMillau awarded them 16.0 points (out of 20). Head chef in the Michelin period, were, amongst others, Theo Koch and Ber Stassen. Present head chef is Hans Snijders. The castle is located just north of the Belgian village of Kanne, south of Maastricht but still on Dutch territory. It is built on a site that was already in use by the Romans. The caves, created by mining blocks to build the fortifications, still exist. They are now in use as the wine cellar of Neercanne. In 1465 the castle was destroyed by the people of Liège during the Liège Wars. The outbuildings and the prominent corner tower were built in 1611, in the style of the Mosan Renaissance. The main building was built in 1698 by Daniël Wolf van Dopff, lord of Neercanne, at that time the military governor of Maastricht. All present buildings are built from marl. In the valley in front of the castle flows the river Jeker and is a baroque garden, reconstructed to the original design.

How To Get To Château Neercanne (Map):